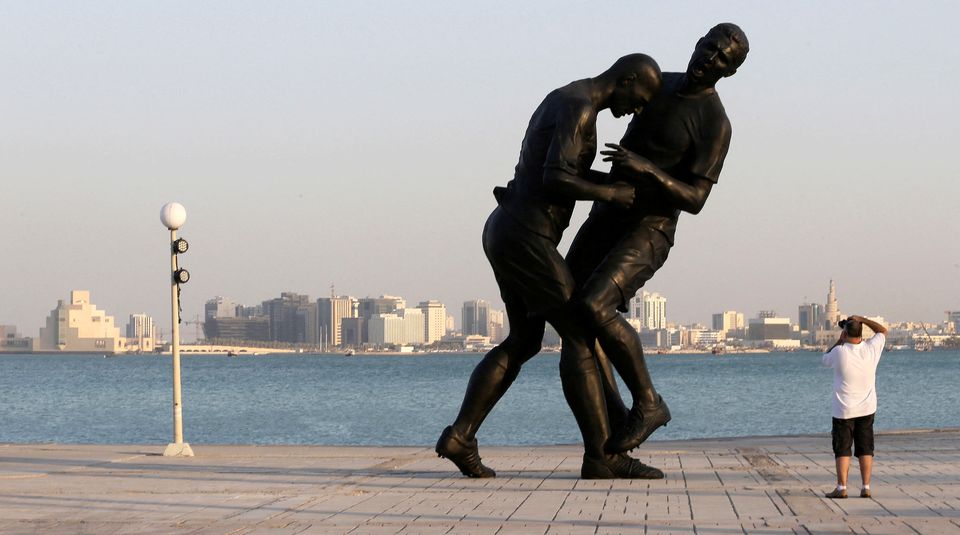 In honor of the headbutt that was heard around the world

It was the headbutt that was heard around the world. On Sunday, July 9, 2006, football fans around the world watched in shock as French-Algerian striker Zinedine Zidane planted his head onto the chest of Marco Materazzi, bringing him to the ground, after the Italian defender allegedly insulted Zidane’s sister during the 2006 World Cup final between Italy and France. It was one of, if not the most controversial moment in sports history. In the seconds that followed, Zidane was sent off with a red card in extra-time and Italy ended up winning the match on penalties. But it was the headbutt that would go on to spur countless debates, memes, and even art work.

In fact, a statue immortalizing the historic moment was briefly put up on display on Doha’s seafront in 2013, before being swiftly taken down due to backlash from conservatives and concerns that the Gulf country was promoting violence.

Now, ahead of the 2022 World Cup, which is taking place in Qatar this November, the 16-feet tall bronze installation called “Coup de tete” is set to be reinstalled. It will be remounted in a new sports museum in Doha. “Evolution happens in societies. It takes time and people may criticize something to begin with, but then understand it and get used to it,” said Qatar Museums Chairperson Sheikha Al-Mayssa bint Hamad bin Khalifa  Al-Thani, who is the sister of Qatar’s ruling emir.

The sculpture is the brainchild of Algerian-born artist Adel Abdessemed and depicts the legendary footballer in confrontation with Materazzi. Protests that it breached Islamic values on idolization as well as concerns that it encouraged violence led it to being taken down.

The statue will be part of an exhibition that explores the impact that high-level sport has on mental health and wellbeing.

“One of the things we’re trying to teach and empower people through art is facts about life,” explained  Al-Thani during a press conference. “So with the Zinedine Zidane sculpture, we’ll be talking a lot about the stress on athletes under big tournaments and the importance of dealing with issues of mental health.”