In France, women from a North African background have been referred to as beurette; a term introduced in the 1980s to name young Arab immigrant girls who have integrated into society. Today, the word’s meaning has evolved and became derogatory – even insulting. Incarnated by personalities such as Zahia (an escort who counts 137k followers on Instagram), beurette is one of the most searched phrases in France on the internet.

But recently, younger girls have been re-appropriating the term, using the aesthetic codes of the beurette to empower themselves. Lisa Bouteldja is the self-proclaimed President of the Beurettocracy – “a democracy were beurocrats are free and equal before the law”, she says.

With her provocative pictures, Lisa Bouteldja has been taking the internet by storm. But she isn’t just doing it for the ‘gram. Currently, she’s working on a documentary analysing the fantasies and sexist, classist, racist and post-colonial oppressions implied by the term.

MILLE caught up with Bouteldja to find out about her upbringing, what it means to be a French-Arab woman in France, and how the internet can be a weapon.

Where did you grow up and how has it affected your identity?
I come from nowhere. I grew up in Saint-Dié, a small town in Eastern France. In PNL’s song Luz de Luna, when Ademo raps, “Hey, I’m in the valley and I’m hungry” (“Salut je suis dans ma vallée et j’ai la dalle”), he sings my life for real! That’s why I left to conquer the world. I have an insatiable hunger!

My mum is French and my dad is Algerian. Growing up with two cultures is inherently special, but being half-colonist half-colonised really is something particular. I have the two old enemies living in my blood. I’m born on July 5, the date of the independence of Algeria. I don’t believe in coincidences.

I spent my adolescence feeling both French and Algerian, and then neither of both. I often felt lost. And France’s identity crisis is even more intense in the provinces. But I was lucky to have always been passionate about fashion; it’s my only safe space, where I feel legitimate to be myself.

Is that why you decided to create an IG account?
I created my account around 2013. At first, everything was super codified, everyone looked like each other, and I didn’t know where to fit within the mass. Progressively, I started to stage my outfits. I didn’t have a particular goal. Everything is genuine, but I love to provoke. I love putting people in front of their frustrations. One day, I wore a scarf of the Algerian team and people loved it. But I also received weird messages from a guy in Paris who I didn’t know and I had a beef with him online. The thing with me is that the more I’m going to disturb people, the more I’ll continue doing it. People say I’m “vulgar”; but vulgarity is such a French concept. Most importantly, people have called me a beurette and I have always turned it in my favour. 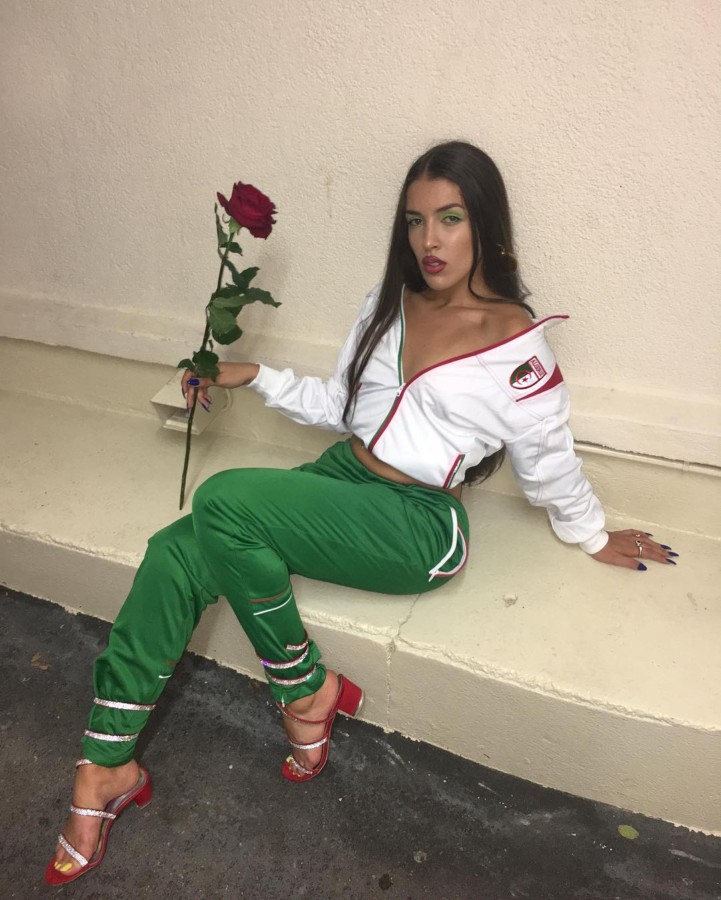 You referred to a French identity crisis. What do you mean by that?
The identity crisis is real! You can’t have plural identities here. I’m proud to be French. I’m also proud to be Algerian. I’m proud to be a woman and so many other things. But in France, they want us to hide and mask our history and our family’s heritage, in the name of integration. And us, the children, grandchildren and even great grandchildren of the diaspora, we’re always asked to justify more than others that we are French citizens. My generation isn’t going to remain passive. The internet is an arm that has given back the power to the people, and as a beurettocrat, I’m just exercising my duty. I want to open the door for everyone to feel free.

Can you explain how you’ve managed to emancipate yourself using the stigmatising aesthetic of the beurette?
My image is my possession. I make sure to always control the injunctions people project on me. That’s why I have always called myself beurette. Re-appropriating the insult is resilience, the same way Afro-Americans did with the n-word. The beurette is the crystallisation of everything that worries France. What is a French–North African woman in 2018? Either a girl from a reality TV show, loud and vulgar, or a veiled woman, extremist and dangerous. This dichotomy says a lot about how people think. The Arab woman has never been integrated, whatever her choices are.

I’ve never felt prouder of my origins than today. By re-appropriating orientalist codes, I am auto-orientalising myself; I am turning the stigma around. On Instagram, what I’m doing is in fact political, with derision. My approach has touched the heart of my sisters; I’ve received love letters full of hope. The word beurettocracy is everywhere!

So what are you favourite beurettocrat spots to hang out?
I’m studying at CSM in London, but will be graduating soon. I live in Finsbury Park, the only neighbourhood where you’ll find Algerians. I like to go to the mall in Wood Green, this is where I find my Chanel and Louis Vuitton jewellery, and my Versace accessories made in Pakistan. For real designer shopping, Machine-A in Soho is the spot. I also like to chill at Shisha bars on Edgware Road. If I go out, you’ll find me in Dalston.

In Paris, I love the 20th arrondissement. The food there is the best. I love the 18th too; this is where I find my Algerian tracksuits. And if you want nails like Rihanna for just €20, head to Mei on Rue du Poulet.