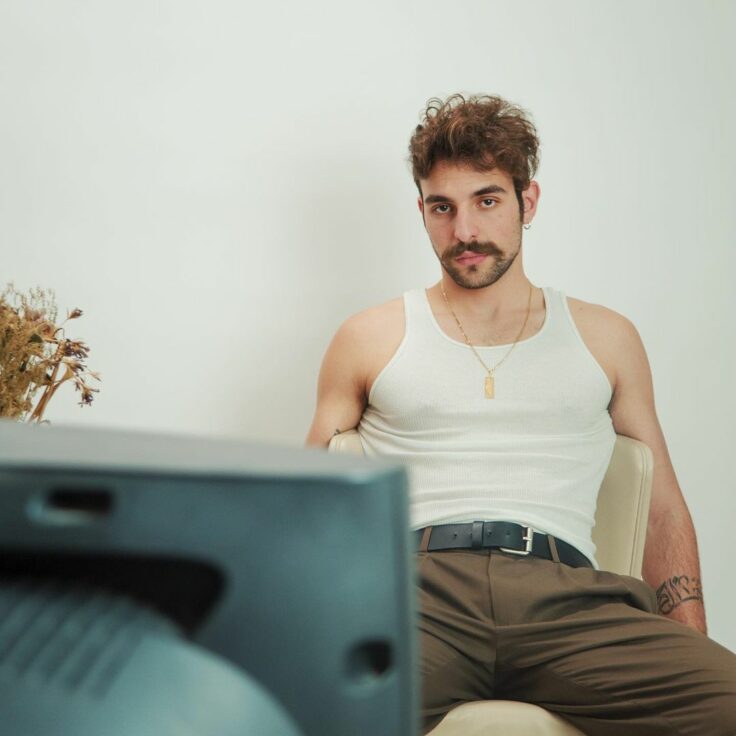 Inspiring to say the least

This summer, we saw who was back then a rising Saint Levant perform alongside longtime friend and collaborator Bayou in their first-ever performance in the United Kingdom. To everyone’s consensual agreement, the duo proved that their surrounding hype had reason to be and that the modest numbers shown on their respective social media profiles could only be expected to double in size given the slew of superlative adjectives that were used by concert-goers to describe the pair on stage.

Since then, Saint Levant, born Marwan Abdelhamid, has grown into an unmissable figure in the region’s scene, and beyond, bursting through global music charts, trending on TikTok and Twitter, with pretty much every Gen Z now being able to sing along to each one of his lyrics. Whoever thought that the young artist had already peaked was fortunately wrong as in the months following the London concert, the 22-year-old exceeded all expectations and bets placed on him, with life still seeming to have much more in store for one of the Arab world’s most popular of sonic ambassadors. Most would probably agree on Very Few Friends being his formal introduction to the general public, garnering nearly two million YouTube views on the track’s official video clip with each line turning into your crush’s latest caption on Instagram.

Whatever the crooner was initially hoping for is seemingly finally happening. The opportunity to seize the moment of now has not only been taken but more importantly closely harnessed, with his name only expected to be seen plastered left, right and center in 2023. Now a regular cast in campaigns, a usual interviewee in some of the world’s most esteemed and respected publications, and a go-to figure when probing the region’s musical landscape, the French-Palestinian artist’s coronation is on its way, and his last show in Beirut served as first-hand evidence of just that.

After an energizing show in Amman the week before, Beirut welcomed the singer on Dec. 28 for what was his Beirut debut. For approximately two hours, Abdelhamid, accompanied by his loyal team, namely Playardd and DonCaderni, took the stage to play through his repertoire of RnB songs and make concert-goers let go and dance their way into the early hours of the next morning. And there were many lessons to take note of during his performance. Here, a quick recap of the biggest takeaways to keep in mind if you are trying to make it in any discipline.

According to stories posted by Saint Levant himself on Instagram, this was the most important crowd he’s ever played in front of so far. Singing for approximately 1000 concert-goers, it’s important to remember that this kind of success and fame does not come overnight and is in fact the tip of a much larger iceberg made of relentless hard work, discipline, and constant focus.

Abdelhamid isn’t lucky, he’s been building momentum for the past two years from instigating a mini-career at first as a TikToker, then spending all his time and energy on making music. Averaging a release every month or so, at the highest of standards, it’s only natural to see his labor come into fruition, so remember, consistency and concentration are always key.

Social media is an echo chamber

As soon as you start hitting big numbers, it’s almost inevitable, you’ll always be met with detractors spilling their venom online — especially on Twitter. Sometimes, artists can find it hard to get their heads above water and ignore the hundreds of deprecating comments seen written about them online. One thing to constantly keep in mind is that whatever happens on social media usually stays on social media and in Saint Levant’s case, the above rule proved to be true. Not a single soul could be heard calling him “cringe” or “wet” this week in Beirut, as he kept on getting praised throughout the night with most attendees lauding his come-up.

Surround yourself with people you trust

If Saint Levant sings about his imaginative fling having “very few friends” it’s because it’s a mantra he applies to himself first. From his team members, whom he considers as friends above anything, to the artists that come up on stage with him, everyone surrounding the young multi-hyphenate is carefully chosen, with trust and honesty being the backbone of each bond they entertain between themselves. Around when Saint Levant was just trying to make a name for himself in his college dorm and early releases, best believe that if things ever start heading south for him, a healthy support system will always be present to help get him through it.

Don’t get blinded by the industry’s cameras

One thing we personally appreciate with Saint Levant, is that he’s always kept it real. Even if his numbers have blown up since we first interviewed him back in 2021, when bumping into him after his concert, he’s still the same individual pursuing his dream of making it big.It’s the same people that he’s surrounded with and it’s with the same energy that he comes to greet you, appreciating the fact that we made the effort to come through to show love and support. No arrogance in sight when quite frankly, especially in this industry, people start acting way too big for their boots with the fraction of the success he’s currently experiencing. We stan.