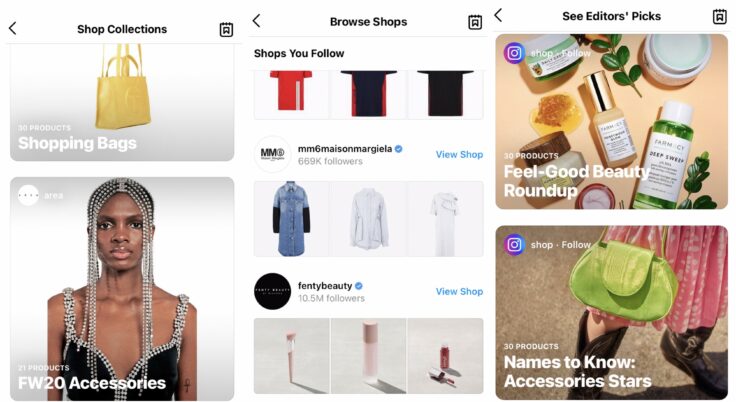 First it was IGTV, then it was Reels. But that wasn’t enough, Instagram is now a fully-fledged shopping platform. And we’re not sure how we feel about it.

In late 2020, the social media giant went from shopping tags that redirect to brands’ websites to a full in-app purchasing menu. Since then, Instagram has been doubling down on the power of algorithms to curate a personalized shopping experience based on one’s preferences, allowing users to shop from almost anywhere on the app, be it stories, lives or IGTV.

Brands can also build their own customized shops, which is a feature that parent company Facebook also introduced on its platform. But why is social media suddenly betting on e-commerce?

The move should come as no surprise in a climate where online shopping is increasingly retail’s norm. In 2019 alone, e-retail sales surpassed 3.5 trillion dollars worldwide and it’s expected to grow even further.

But it doesn’t stop at statistics, marketing (namely influencers strategies) is today one of social media’s ultimate powers and social media giants are using it to get a piece of the revenues.

Considering that 87 percent of people say influencers have inspired them to make a purchase, according to a 2019 survey, Instagram—the ultimate home for influencers—is investing in their power to stimulate users’ purchase impulse on the app. The premise is simple: you see a post of your favourite influencer, you like what they’re wearing, you can immediately get it.

While Instagram is doubling down on influencers, other platforms are focusing on future consumers, Gen Z. Case in point, the generation’s favourite app TikTok has also decided to jump on the bandwagon.

After already announcing a partnership with e-commerce platform Shopify, which allows its merchants to create TikTok-tailored marketing campaigns, the viral app is on the way to creating its own online shopping experience.

According to Financial Times, TikTok is set to introduce new in-app shopping features in 2021 which will allow users to share links to products and automatically earn commission on any sales, even if they were not formally sponsored by the brand.

Brands will also be able to showcase their products on the platform and place their own ads easily online. Not to mention an entire new ‘live streamed’ shopping experience. Think television shopping but on a smartphone. The feature will allow users to make a purchase with a few taps after seeing the products showcased by TikTok stars.

Whether more platforms are joining the race to e-commerce is still unclear but the battle between TikTok and Instagram will definitely be changing the face of online shopping forever.