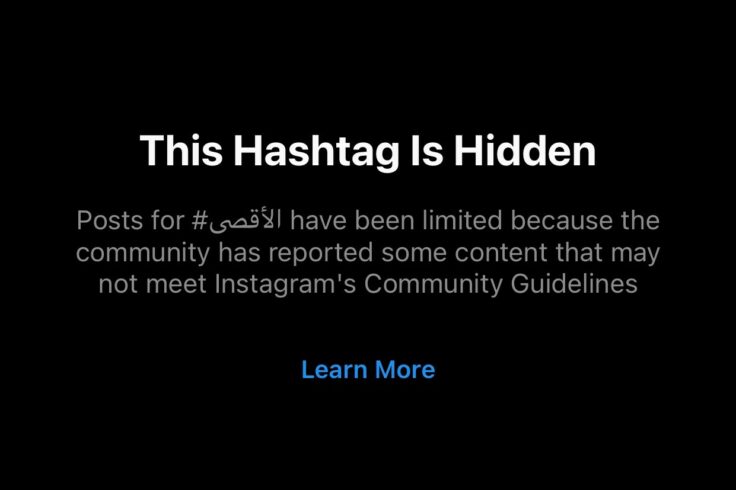 In light of recent events in Gaza and East Jerusalem, activists and social media users have mobilized to bring awareness and share information on the violence conducted by Israeli forces in Palestine using hashtags like #SaveSheikhJarrah, #FreePalestine and #GazaUnderAttack.

But amidst the growing campaigns, many users have reported facing censorship of content about Palestine, accusing Facebook, Twitter and Instagram of shadow-banning posts on the events. Many have seen their accounts shut down, their posts removed or limited and their stories receive lower views than usual.

Poet and writer Mohammed El-Kurd who has been actively reporting and advocating on the events shared a statement soon after the devastating events in Sheikh Jarrah case began capturing wider attention, saying: “Instagram just let me know they might delete my account, because posting videos of state-sanctioned ethnic cleansing is against their community standards I guess.”

After facing allegations about the shadow banning, Instagram claimed this to be a “global technical issue” in an official statement. But this isn’t the first time the platform has shadow banned posts. A former Instagram employee tells us: “Every time we noticed that some posts were less visible, the official response was always that it’s a bug.”

Yesterday, the platform also deleted the account of Gaza-based journalist Abedelrahman Alkhalout. Twitter on the other hand previously stated that the restriction of the account of Palestinian writer Mariam Barghouti was an “accident”.

These claims were met with doubts and anger, given the nature of the targeted content and the history of Israel’s involvement with social media companies to censor Palestinian voices. In 2016 alone, Israel’s justice minister at the time stated that Facebook, Google and YouTube were “complying with up to 95 percent of Israeli requests to delete content”—almost all of it Palestinian.

The censorship is also closely tied to Facebook’s secret internal rules for monitoring the term “zionist” which, according to The Intercept, have been in place across the platform and its subsidiary apps like Instagram since 2019. Although last March, the company stated that no decision had been made on whether to treat the term “zionist” as a proxy for “Jew” when determining whether it was deployed as “hate speech.”

“Facebook claims that their policy on the word ‘zionist’ is about Jewish safety,” Dani Noble, an organizer with Jewish Voice for Peace who reviewed the rules, told The Intercept. “But, according to their content policy excerpt, it seems Facebook decision-makers are more concerned with shielding Zionist Israeli settlers and the Israeli government from accountability for these crimes.”⁠

Needless to say, systematic censorship is now being used as a weapon by social media to silence Palestinian voices and stop the momentum. Despite this, activists are not showing any signs of slowing down.

New guided posting methods to counter the censorship are being used including alternative spellings for keywords (for example: Pal-estine or S*eikh Ja**ah), sharing non-Palestine-related stories in between, and increasing interactions with adding voting options.