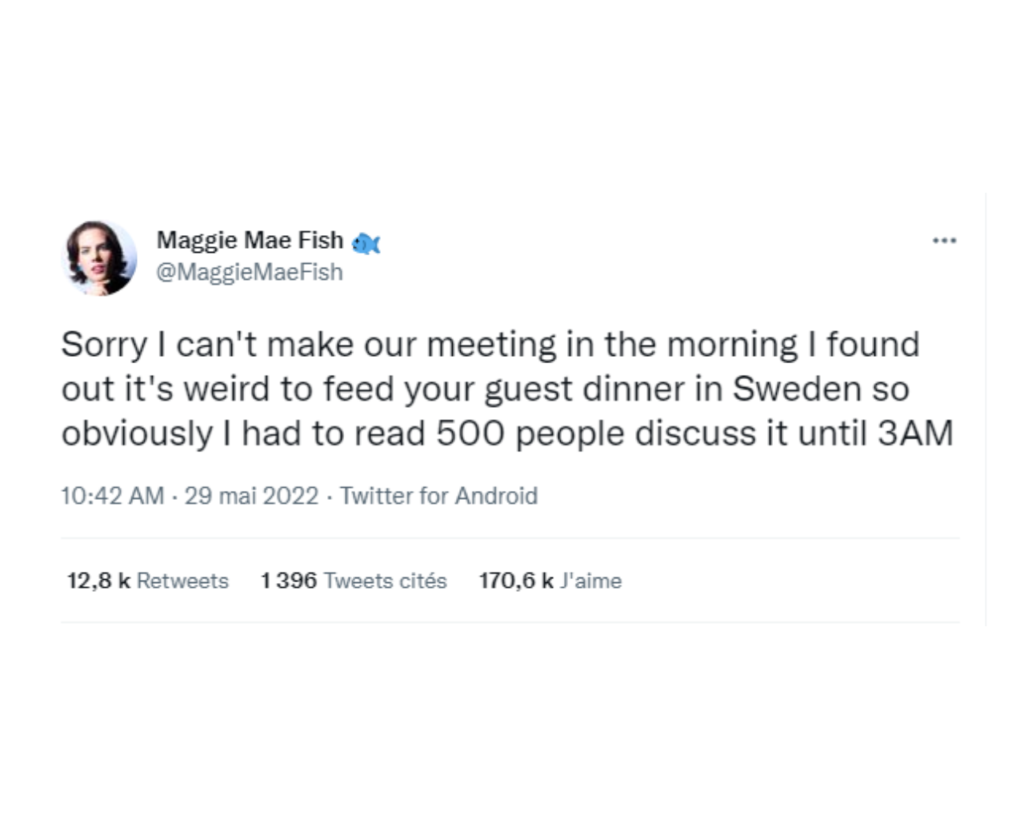 Do Swedish Parents Really Not Feed Their Children’s Friends Dinner?

To some extent, it’s true that Twitter has this edge of being the people’s courtroom – and many would argue that that’s the beauty of it. With every new day comes a new topic, viral trend or drama to put under the microscope, dissect and open the gateway to hundreds, not to say thousands, of jokes about that same given matter.

Over the weekend, an interesting screenshot, to say the least, emerged from Reddit and managed to make its way onto the bluebird app. Hailing from a popular thread on the American website, made for users to engage around thought-provoking topics, u/sebastian25525, took to his keyboard to ask what the weirdest thing people ended up doing at someone else’s house as a result of their culture and religion. And the replies are well-worth the scroll.

Not here to judge but I don’t understand this. How’re you going to eat without inviting your friend? pic.twitter.com/bFEgoLiuDB

According to some of the experiences shared in the comment section, it’s not uncommon, when having people over in Sweden, for the invitation to not extend to have dinner when sleeping over at a friend’s house. An unthinkable thing to imagine when coming from the Arab World. Surprised as we were, we had to ask our Cairene representative of the Scandinavian country whether these, by our standards at least serious, allegations were just or not.

“It’s 100% true. The internet is slandering Sweden right now and every single immigrant is like “slander on” because it’s undeniably true. And I agree. It literally is a thing, and I’m ashamed of it.” says Edgar Mannheimer, freelance journalist and cool kid living in Cairo.

By the sounds of it, if you haven’t been invited to dinner ahead of time, you most likely won’t be served. Although less common in immigrant families, it seems as if this unspoken rule is justified out of respect and courtesy to the visiting child’s parents, who may have prepared a meal that would be squandered if you fed them.

Reactions quickly spread on Twitter with some users getting creative with the given situation to give birth to a slew of sarcastic memes and entertaining one-liners.

Swedish kids after a sleepover pic.twitter.com/9D35nEI3w1

This is blowing people’s minds, so as an amateur historian and sociologist I’m going to try to explain this development/ cultural artifact. pic.twitter.com/vNF0MMpMFK

As the claim caused such a huge stir online, we thought that it was only fair to ask what Mille’s friends thought about it all as, when coming from the Arab world, it’s pretty sure that this dining debate would never even exist, to begin with.

“If anyone, no matter how close to me, did this, it would be a huge insult. It’d be a friendship-breaker for sure. Our whole culture is based on sharing no matter what there is to share. I’ll split a pizza with any one of the boys even if it’s the last slice. There’s no way that this would slide, and I don’t think I’d be the only one to think that.” commented Magdy, a 23-year-old student.

When bringing the conversation up with my local corner-shop owner, he didn’t have too much more to say other than “La Hawla Wala Quwwata Illa Billah” – no need to translate the pious saying to understand its underlying message.

Whether it is for religious motives, or simply for hospitality reasons, it’s increasingly clear that this would most likely never be a situation for anyone that would find themselves invited to an Arab household. Although it goes without saying that cultural differences are not to be commented on, this one clearly deserves a little underlining in our books.