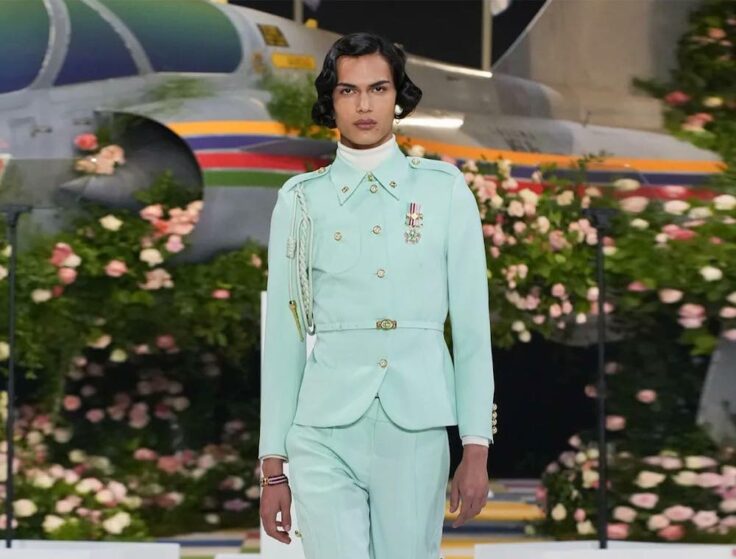 We have no choice but to stan

On Friday, Charaf Tajer presented his Fall 2023 ready-to-wear collection for Casablanca during Paris Men’s Fashion Week, currently underway in the French capital. The runway show, titled “For the Peace,” was a striking homage to refugees, more specifically refugees from Syria, where the Paris-born designer recently spent some time last month. According to Tajer, the collection is inspired by courage, reflecting the pain, and the beauty that he witnessed in a war zone.

“Last year, my friend Maya (Chantout) told me an incredible story about young people in Syria who risk everything to find joy,” Tajer said to the audience, which included British grime artist Skepta and rapper Kodak Black, ahead of the show. “They were doing something that you and me would find ordinary— partying. Except, they were trapped by the fear of bombardment. For them, partying is an act of courage and resistance. Inspired, I went to Damascus. I lived in paradox, where beauty, devastation, and ruins co-exist.

“I found there, humanity, generosity in the oldest capital in the world. It was a great reminder for me to celebrate life in all conditions… So let’s not think of refugees as numbers, but as human beings, as equals, without any hierarchy or discrimination. Refugees carry so much from their past— the homes they left, the loved ones they lost.

“But, we have a simple choice today. To accept the tragedy or use our platforms to spread this important message. I’m not saying that fashion is the solution, and some people might say it’s just clothes. But the idea is to use our voices to shout loudly and do anything we can to create a better world.”

It’s the first time that a highly-coveted fashion house and influential designer uses a major platform like Paris Fashion Week to shed light on the plight of the Syrians. While we’re used to seeing the Middle East, more specifically Morocco and Egypt be celebrated (though through an oriental lens most of the time), few designers have actually ever used their platform as a form of resistance, and for that, we have no choice but to stan Casablanca.

Read on for the key takeaways from Casablanca’s Fall 2023 Ready-to-Wear show.

The Set
The runway was flanked by a real-life Syrian fighter jet that was covered in white and pink roses, a symbol of peace. The jet boasted painterly swipes of yellow, red, blue, and green across the side that matched the checkerboard floor.

The Soundtrack
Further paying homage to Syria, the show opened with Syrian singer Mayada El-Hennawy’s Alouli Ansa— not to be confused with Aaliyah’s More Than a Woman, which sampled El-Hennawy without credit! Other Arabic songs that featured include Melit mel Ghorba by late Algerian artist Warda Al-Jazairia, which translates to “I’m tired of living abroad.”

Syrian Refugee Yusra Mardini Walked the Show
Yusra Mardini, the Syrian refugee-turned-olympian who is the subject of Netflix’s The Swimmers, made her runway debut at Friday’s show. Mardini, who fled to Greece with her sister Sara on a dingy boat, walked down the runway wearing a long, leather belted trench coat paired with blue knee-high boots.

The Jewelry
Syria wasn’t the only Arab country to have a starring role in the new collection. Models walked down the runway sporting jewelry designed by 2022 Fashion Trust Arabia finalist Dihyan, created by Moroccan accessories designer Youssra Nichane and her co-founder Nicole Abate.

The Clothes
While Casablanca’s tennis pro vibe remained discernable, there was also expertly-tailored suits finished with pearlescent buttons, tops and trousers emblazoned with the brand’s monogram print, trench coats featuring the same checkerboard patterns seen on the flooring, and aviator insignia pinned to jackets and blazers. A standout womenswear look was a sheer, white dress with a high neck paired with chunky translucent bracelets.