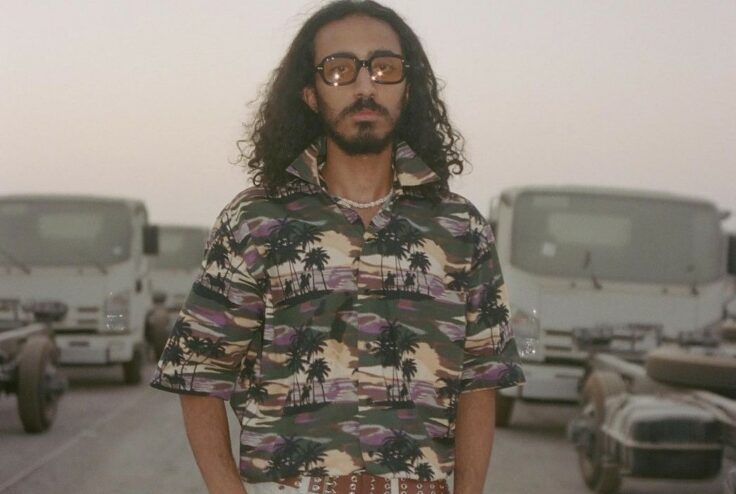 The Forces Behind Saudi’s Creative Boom

A deep dive inside the Kingdom’s budding scene

There’s no denying it: Saudi Arabia is shaping up to become a key cultural force in the region. If recent years have been any indication, a creative renaissance is well underway.

And it’s been building up for years before Vision 2030 came into play. In 2012, Haifa Al Mansour, the nation’s first female filmmaker, directed the first film to be entirely shot in the Kingdom. Ahmed Mater, considered one of Saudi’s most influential artists, saw his work exhibited internationally for a decade, with his pieces hanging on the walls of The British Museum and the Guggenheim.

But it wasn’t just those who garnered institutional support who built the foundational blocks of the Kingdom’s contemporary creative scene. Without any concrete prospects guaranteed, young Saudis took to the internet to make their work known, striking audiences with a local perspective. Take Telfaz11 as example, the media studio, which just inked an eight-feature film deal with Netflix, bootstrapped its way global recognition since 2011, dropping some of the nation’s most viral videos.

It didn’t take long after for Saudi’s creative doors flooded open. The once ultra-conservative nation that banned cinema saw its first movie theatres open up. Filmmakers who once only found creative refuge on YouTube now see their films projected on silver screens across the Kingdom.

A rave in the middle of the desert? An inconceivable occurrence in the nation just five years ago. In 2019, it happened. Saudi Arabia hosted its first music festival, MDL Beast, which saw 130,000 visitors and a line-up that included both local and globally-recognized DJs.

Until 2018, co-ed concerts were illegal. Women had been banned from even entering music shops since 2013. Needless to say, recent years saw the nation flip-turn, paving the way for a complete cultural paradigm shift.

Today, art exhibitions fill up the Kingdom’s cultural calendar. Alongside raves, the Saudi desert is now also home to a once exclusively California-based biennial, Desert X. As for fashion, a new realm is building up, with the nation hosting its first ever fashion week in 2018.

We wanted to delve in a little deeper. To get an idea what the future holds for them, we rounded up, and chatted with the creatives shaping it all up.

Fashion and photography go hand-in-hand for the 27-year-old Hayat. The self-taught imagemaker first discovered an interest in photography at a young age, when she would capture outfit pictures for social media with a digital point-and-shoot gifted to her from her mother. After sharpening her photography skills via YouTube tutorials, she began shooting Saudi’s burgeoning creative scene and uploading the raw portraiture of her subjects onto her online project Recent Magazine. Today, Hayat’s portfolio is brimming with editorials and her signature documentary-style portraits for renowned publications such as GQ, and campaigns for the likes of Diesel.

“We’re all aware that the industry we’re in is new and it’s just right for us to raise the standards,” declared Designless. The Saudi-based photographer, whose work has appeared on the pages of GQ, and worked alongside Farfetch and Adidas to name a few, has built a name for himself for his instantly distinguishable lens. One of his missions? Paving the way for others.

“[We need to] give the people that are considering the idea of pursuing a creative career something to look up to… we know a lot of people have done it before, and with all due respect it wasn’t something that sparked us to pursue this, the newer generation is looking at their culture and body of work beyond it being “local and cultural” we’re aiming to meet and exceed the international standards,” he says.

Shortly after the German-born photographer and creative obtained his Master’s degree from the Academy of Art University in San Francisco, he quit his 9-5 and returned to his native Jeddah launch his own creative practice, Nawawi Studio. He would go on to work with a number of renowned publications and luxury labels that some can only dream of, including Dolce & Gabbana, Nike and Daniel Versace.

Al Jaser began his film-making career when he was only 17, and resorted to sharing his films on YouTube since a cinema ban was still in place in the country. It didn’t take long before he garnered a total of 80 million views on his channel Folaim, 200 million views on Khambala and 400 million views on La Yakhtar and Tmsa7ly, short films that he directed and wrote. As the country removed its ban on film and cinema, Al Jaser was asked to inaugurate the country’s new industry with his film Is Sumyati Going to Hell, which was acquired by Netflix this year. What inspired it all? Saudi in of itself. “I usually get inspired by my culture and specific aspects of social behaviour. I love the diversity in the Saudi culture, and I admire how detailed each culture is,” he told us.

Having risen to fame through Telfaz11’s viral videos, The Godus Brothers, Sohayb and Faris Godus took things to the next level with their film The Book of The Sun.  The duo’s first feature-length film premiered, which was slated to make its debut at Red Sea Film Festival, wound up premiering in theatres in Jeddah in June of 2020, quickly becoming a success. It didn’t take long before Netflix acquired streaming rights.

Whether it’s film, social media, or as the face of your favourite luxury brands, chances are you’re already familiar with Mohamed Alhamdan, or Warchieff as he’s known to his legion of over 4 million followers on Instagram. The actor and musician might have first risen to fame through his work on Telfaz11, but he’s now in a league of his own. His latest film, Arabian Alien, in which he stars made its debut at Sundance Film Festival, and is now in the running to become Saudi Arabia’s Oscars submission.

The up-and-coming rapper, who was born in Canada, is instantly recognizable by his catchy lyrics and harmonic flow. At only 16-years-old, he just dropped his debut album ‘Wus Good Hawsa 3’ on streaming platforms Apple Music, Tidal, Deezer and Amazon Music and Spotify, where he has garnered over 73,000 listens.

Nasser Alshemimry, is better known through his stage name Desertfish. In the Kingdom, he’s redefining the music industry, more specifically, how techno is perceived in the nation. It’s safe to say he’s on the right path. Through his record label, Gleam Records, Alshemimry is paving way for other DJs and artist to flourish in the nation. It’s a mission that holds special meaning to him. “Both the art and music scene are providing various chances for people to prove themselves,” he explained. “This cultural renaissance we are experiencing is pushing the envelope for creatives to truly shine.”

The 23-year-old first made a name for herself on social media platform TikTok. But it wasn’t until she released her latest single “966” on Saudi National Day, that her career really took off. Splitting her time between Saudi Arabia and Sweden, where she initially discovered her talent for rapping, she was recently selected by streaming giant Spotify for the platform’s latest initiative, Sawtik.

The Riyadh-based software-engineer-turned-designer founded his streetwear label and project Too Dark to See Tomorrow (2D2C2M) in 2016 with a lineup of graphic T-shirts, socks and oversized hoodies baring an image of his childhood hero, Yemeni-British boxer Naseem Hamed. More recently, Al Wohaibi made headlines for staging the Kingdom’s first-ever independent fashion show in January. “My inspiration changes from time to time, depending on where I am at in life. Currently, my source of inspiration goes beyond fashion and styles. It’s a real-life inspiration,” he revealed to MILLE of the show.

When it comes to luxury vintage fashion, there’s one name you’ve come across with certainty. The Saudi stylist and lawyer Rae Joseph launched her eponymous store 1954 by Rae Joseph in 2017, and the rest is history. Today her carefully-curated pieces—made of iconic Chanel and Dior pieces—find homes across the region. Joseph even partnered up with online retailer Ounass to make it all that more accessible.

When it comes to streetwear, Crowdless is Saudi’s go-to destination. The Jeddah store, which first opened its doors in 2015, bringing some of the world’s most sought-after labels to the Gulf country.

A graduate from Conde Nast College of Fashion and Design in London, Latifa Bint Saad is continuously breaking down barriers for Saudi women. The Jeddah-based stylist and creative director has worked with several international publications, including i-D, GQ, Vice and Elle. Bint Saad is emblematically passionate, constantly drawing inspiration from her Saudi heritage, despite a lack of prospects to make put her passions to work. “Growing up, there weren’t any [opportunities], we had to create our own. However now things are changing. The spotlight is now on us with many publications and brands dedicating issues and budgets to its Saudi market,” she says.  “With that there is great pressure to provide an authentic and unpretentiously candid depiction.” But there’s one thing she remains wary about: “We should stop seeking validation from others when we have our own personal stories to tell.”

The stylist and content creator, who graduated from London’s University of the Arts, is responsible for dreaming up the looks for a number of editorials, photoshoots, look books, music videos and advertisements in Saudi Arabia. But her credit for “stylist” goes beyond simply pulling together the looks: She’s also involved in nearly every visual element, including hair and makeup. Meanwhile, in addition to working with renowned brands and various publications, Al Issa is also a personal stylist, who establishes deep relationships with her long list of clients that commission her to revamp their wardrobes, overhaul their closets and assist them in packing for glamorous press trips.

The multi-media artist likes to experiment with illustration, painting, drawing and sound, creating characters that are integrated with Saudi slang and pop culture references. For him, institutional support isn’t all that necessary. “The opportunities I face are the ones I create. I never look at things from a ‘Saudi creative’ perspective. I believe I create my own opportunities and based on hard work and goals I set out.”

The multidisciplinary artist grew up between Saudi and England, but her work—ethnographical in its nature—takes a deep dive into her native country’s history through photography, video and print installations. The artist, who graduated from Jeddah’s Dar Al Hekma University and gained an MA from the Royal College of Art, has taken her work across the globe, from the Station Museum in Houston to Athr Gallery in Jeddah for her most recent solo exhibition, Heat Burns.

From writing and sound to photography and filmmaking, Al-Faraj does it all. At the heart of his work is his village Al Ahsa. In his words, Al-Faraj is an archivist, documenting his surroundings through daily life in all their details. His work has made its way to Italy, in 2019 for his exhibition ‘The Glass Between Us’. His latest project? A film in collaboration with artist Sarah Ibrahim entitled The Dance of Olive Trees in The Wind, which made its premiere at Saudi Film Festival.

Also Read: 5 Saudi Musicians to Keep an Eye out On