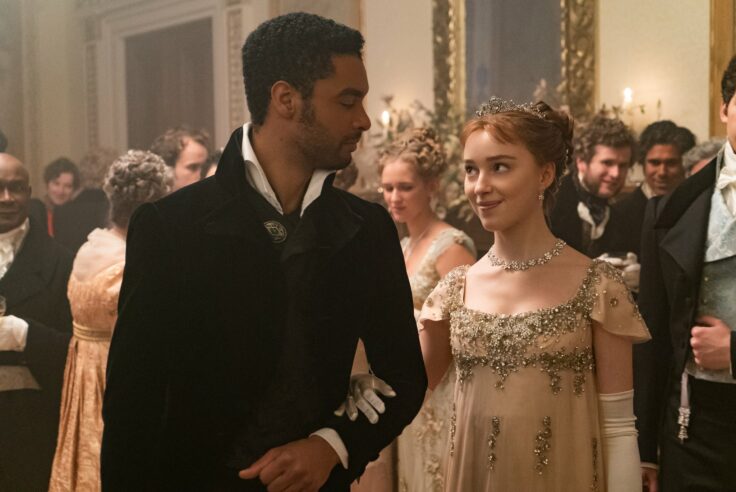 9 Things Every Arab Girl Can Relate to in ‘Bridgerton’

To all the Daphnes out there

You might not want to admit it. You’re ashamed of it. But you can’t stop watching ‘Bridgerton’—if you’re anything like us, at least.

Think of it what you may, but the new Netflix drama successfully reeled the whole world into its universe, just days after its release.  It’s not perfect, but it’s certainly its depiction of England’s aristocrats as people of color that makes it stand out. Not to mention Daphne Bridgerton and Simon Bassett’s gripping love story, the Shonda Rhimes-directed series’ sumptuous set design, intricate 19th century fashion, and of course, Queen Charlotte’s many (and extravagantly stunning) wigs.

From every angle we looked, there was something for us to swoon over. Even the score was a clever take on modern pop songs. If you listen carefully, you might hear Shawn Mendes’s ‘In My Blood’ or Ariana Grande’s ‘Thank U, Next’ transformed into classical covers.

However, ‘Bridgerton’ is more than just an aesthetic celebration of Regency London’s high society. In many ways, it’s a social statement. The series, which is an on-screen adaptation of Julia Quinn’s popular books, was centered around racial issues, cultural taboos and gender-inequality, which unfortunately continue to resonate in the 21st century. One thing for sure, we found ourselves identifying with the female characters on more than one occasion.

From family traditions to social taboos, here are nine things every Arab girl can relate to in ‘Bridgerton’.

Pressure to get married
Oftentimes, a woman’s value is based on whether she has a husband or not. It’s almost impossible to visit family without an uncle or distant cousin asking when you’re getting married. The women of early 19th century London’s high society who make up the ‘Bridgerton’ cast can relate all too well. Each year, a small group of aristocratic British families descend on London for a six-month social season, a time when young ladies try to find suitable men to marry and secure their financial future.

Mothers who turn into husband scouts
It’s a tale as old as time. Once an Arab girl reaches a certain age, the pressure from her family to get married and start producing grandchildren is on. Mothers turn into matchmakers overnight, attempting to introduce you to every eligible bachelor within a five mile radius. ‘Bridgerton’ does a fantastic job at portraying this phenomenon. For instance, in the show, Penelope Featherington’s desire to pursue an education is quickly shot down by her mother, Lady Portia Featherington, whose sole focus is to marry her three daughters off and secure their financial future.

The awkward ‘birds and the bees’ conversation
In our culture, sex is typically a taboo subject, leaving young girls misinformed and naive. In the Shonda Rhimes-directed show, the young debutante Daphne Bridgerton hastily marries the Duke of Hastings, Simon Bassett after a short false courtship,  despite the fact that he supposedly can’t bear any children. Simon leads Daphne to believe that he is impotent, when in fact it was his choice. Daphne soon learns that he is lying by omission after she speaks to one of her servants, who educates her on how women come to be with children, a conversation that her own mother had never bothered to discuss with her.

Expected to get pregnant within months of your wedding
Societal pressure and conditioning influence many women into believing that their true purpose in life is to become mothers.  In the show, London’s high society waits with bated breath for Daphne to get pregnant as soon as she weds the Duke.

Older brothers that try to control your every move
Arab brothers are known to be ultra-protective and controlling, especially when it comes to their younger sisters. The Bridgerton girls have a similar dynamic with their older brother Anthony. As the eldest following their father’s death, it’s Anthony’s responsibility to look after the family, while trying to secure his own wife in addition to helping his sisters find spouses of their own.

“Levirate marriage”
Levirate marriage is a type of marriage in which the brother of a deceased man is obliged to marry his brother’s widow and it is practiced in some Muslim countries, and apparently also by some of the characters in ‘Bridgerton’. In the show, Marina Thompson’s lover and father of her unborn child, George, dies during war. His brother, Sir Phillip shows up to the Featherington home to deliver the news to Marina and offers to take care of her and asks for her hand in marriage.

Growing up with a large family
Arabs traditionally favor big families and tend to have a lot of children. There are eight Bridgerton siblings who are alphabetically named in chronological order: Anthony, Benedict, Colin, Daphne, Eloise, Francesca, Gregory and Hyacinth Bridgerton.

Double standards
A bar or club is no place for a woman! These spaces are strictly reserved for men –  or so, existing double standards condition us to believe. ‘Bridgerton’ could very well be set in a modern day Arab society, with all of the scenes that depict a club or a bar only populated by men, save for the few women present who are only there to serve as mere entertainment.

The obsession with women’s purity
Conditions that define “purity” have long been used to control and exploit women in Arab society and beyond. The show briefly touches on this issue when Daphne and the Duke get caught mid-hook up by Anthony. Simon is adamant about not marrying her, causing Daphne’s brother to challenge him to a shooting duel “to protect her honor” – cringe.