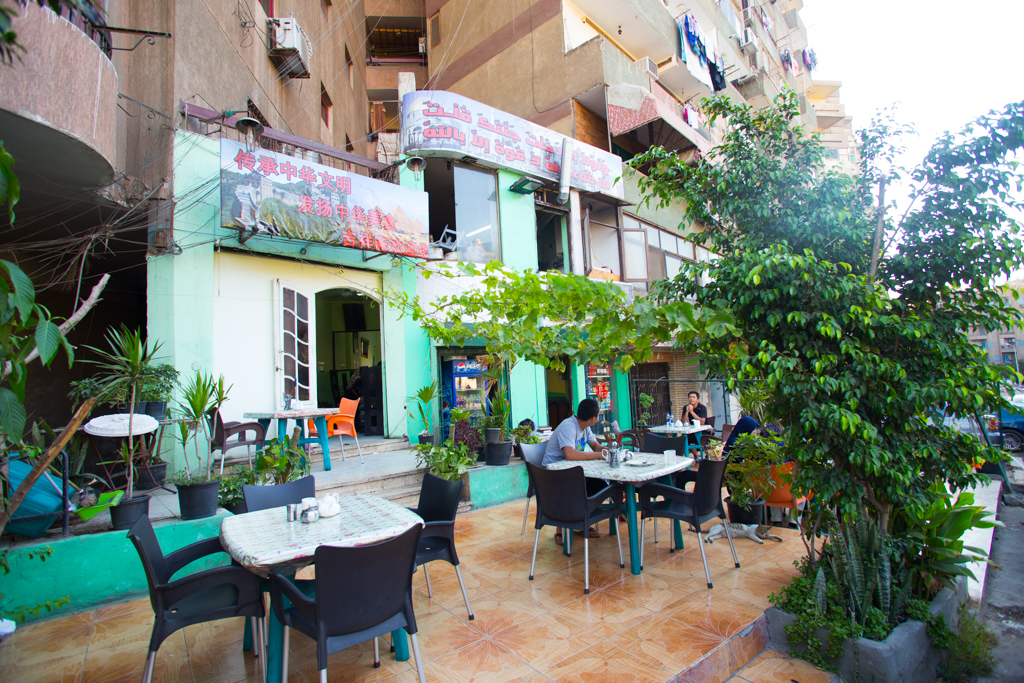 Cairo is a curious place; home to millions over the centuries and a point of convergence for many nationalities. Whether it was the African Americans championing The Civil Rights movement during the 1950s and 60s, or the exiled Iranian Shah in the 1970s, Egypt has been called home by intellectuals, travelers, and tourists for as long as history can be recorded. But situated a few kilometers around Cairo’s Al-Azhar Mosque we find a lesser known but thriving Asian community.

Asia and Egypt might seem like an unlikely pairing, but the reason behind the clash of cultures is much more spiritual than economical. For centuries Al-Azhar has been the global school of Islamic thought. It’s teachings and rulings are recognized across the region and further Muslim world, and Asia is no different. Whether the persecuted Uyghur minority of China, or Indonesia, the largest populous country in the Islamic world, the name of Al-Azhar is revered.

“…And that’s basically why we see so many different Asian neighborhoods around the city,” said Micah Cook, lecturer at The Universities of Canada in Cairo, in conversation with MILLE. “The main pull to Egypt was of course the religious aspect, however that’s not to underestimate the scatters of people from Korea, Japan, or China who are working here under professional contracts,” he added.

For me, perhaps the most interesting aspect is how the Asian community in Egypt can be traced to districts and neighborhoods within the surrounding vicinity of Al-Azhar Mosque itself. Nestled a few streets behind the historic site, you will find the district of El-Darb El-Ahmar, home to the Indonesian quarter, and some of my favorite Indonesian restaurants in Cairo.

First on the list is Lafuzta. The authentic Indonesian eatery is known for its  dim sum and desserts, offering the traditional dumpling dish in several varieties with generous helpings of mentai sauce. Its food has a certain Egyptian twist, using local substitutes instead of more expensive imported products, However, the taste is close to authentic, maybe perhaps even too authentic for the usual Egyptian palette. Their menu is inexpensive yet delicious— the perfect stop for anyone who’s looking for a taste of Indonesia. 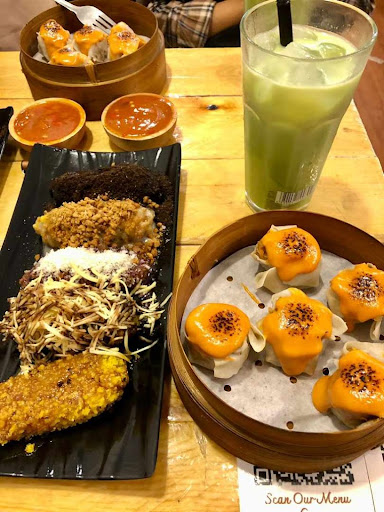 Just around the corner from Lafuzta is Anak Rantau. Loosely translated from Indonesian to English as “Sons of the Country,” the restaurant offers a delectable menu made up of snacks and drinks that are prepared fresh in front of customers, and again at an extremely reasonable price point. The quaint eatery serves from what is essentially a street food cart inside of a shop front, adding a bit of Egyptian charm to the otherwise totally Asian atmosphere.

Both Lafuzta and Anak Rantau cater to Asian students and their families, Egyptians, and others who’ve found themselves in Cairo for one reason or another. If you’re feeling adventurous, may we suggest Minuman? The concoction is comprised of a mix of avocado and taro, and though it doesn’t sound like the most appealing drink, just trust us— it’s one of the most refreshing things that you will ever drank in your entire life. Check. It. Out. 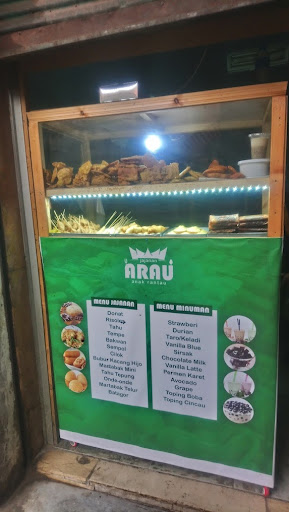 A short Uber ride away from the historic sights of Cairo’s El-Darb El-Ahmar district, we find ourselves in the middle class area of Nasr City, specifically El-Hay As Sabea or the 7th neighborhood. Here is the home to, arguably, Cairo’s best Thai restaurant. While uninspiringly named Nile, don’t let the signage detract you from the culinary delights inside. Expect to find everything from pad Thai, sukiyaki to nom yen, with authentic quality and end-of-the-month friendly prices. 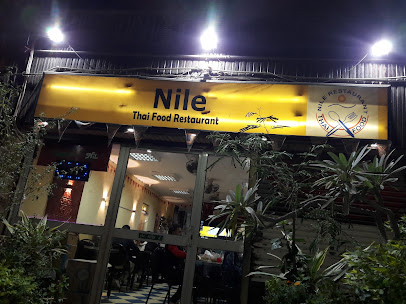 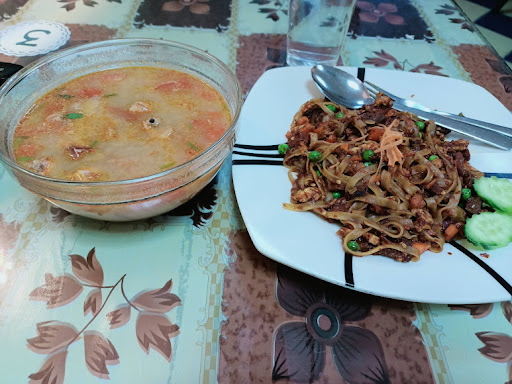 A short walk from Nile restaurant, there’s Almo Mart. Almo is not Egypt’s only Asian market, however it is by far the most popular. They stock products from the entire Asian region so you can expect to find everything from Japanese instant noodles to Indian spices. They’re also all over TikTok, only adding to the cult status of the supermarket.

Meanwhile, it wouldn’t be a culinary adventure if we didn’t stop off at Nur Malaysia. Cairo is certainly no newcomer to Maylay students residing in the area. In fact, there was a Malaysian language newspaper printed in Egypt named Seruan Azhar in the early 1900s.

Nur Malaysia offers practically everything you could possibly think of. The restaurant boasts a wide selection of starters and mains, and not to mention an all-day buffet at affordable prices so you can eat to your heart’s content without breaking the bank. This place is probably the only spot that I would advise a reservation if you wanted to ensure a place on a weekend. It’s typically frequented by the older generations of the Asian community in Cairo and Maylay Azharis. 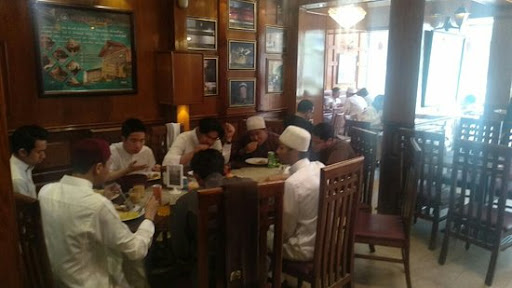 Last but certainly not least, we have the Chinese community. With currently over 20,000 expats residing in the country, they make up the largest Asian demographic in Cairo. Personally, I find the Uyghurs to be one of the most interesting groups. They live much like the aforementioned communities, close to El-Dar El-Ahmar and Al-Azhar mosque. In fact, the whole district of Daher is essentially Cairo’s unofficial Uyghur Chinatown, with many of the residents using names such as Yusef and Ahmed, rather than typical Chinese names. Perhaps it’s a form of resistance as a result of their oppression in China or maybe it’s so they feel more comfortable identifying, obviously, as Muslims in a predominantly Muslim community. Either way, it’s charming and they are very friendly, usually with both a good command of classic Arabic and the Egyptian dialect.

As for the culinary scene in Daher, the most well-revered establishment is a restaurant called Muslim Sini. This restaurant is definitely not the only Chinese eatery in the area but it is one of the oldest and most frequented, catering now more towards the Egyptian community than Chinese students. But when you’re getting several plates of rice and meat and dumplings for 150 EGP ($8) it’s easy to see why. 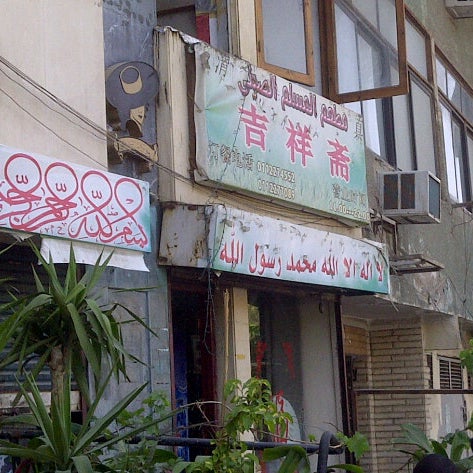 But there’s also a deeper side to the Chinese community here. We caught up with Yu Xige, a restaurant owner in the upper-class suburb of Maadi. Having spent nearly 25-years in Cairo, Xige has a great understanding of the community and Egypt’s reaction to it. Born in China, the restaurateur came to Egypt in 1997 when her mother married an Egyptian, and she’s been living and embracing the culture ever since.

According to Xige, there’s a lot of similarities between the seemingly opposing cultures, “Egyptians are friendly, they love to help. I feel their life goals are very similar (to the Chinese),” she said. “Getting a job, getting married, having children, going to the beach during summer, all of these things are the same,” she added.

The Chinese community in Maadi are more secular than the communities situated around Al Azhar, and it’s only understandable, “Azhari students would live closer to the university and the mosque, it makes transportation easier, whereas the majority of the working professionals reside in Maadi” explained Xige.

For me it’s interesting how one can pinpoint the neighborhoods with Asian residents based on their restaurants alone. If there’s one thing I learned from hopping from one Asian restaurant to another it’s that to always let the food speak for itself— and definitely pay them a visit if you’re in the area.