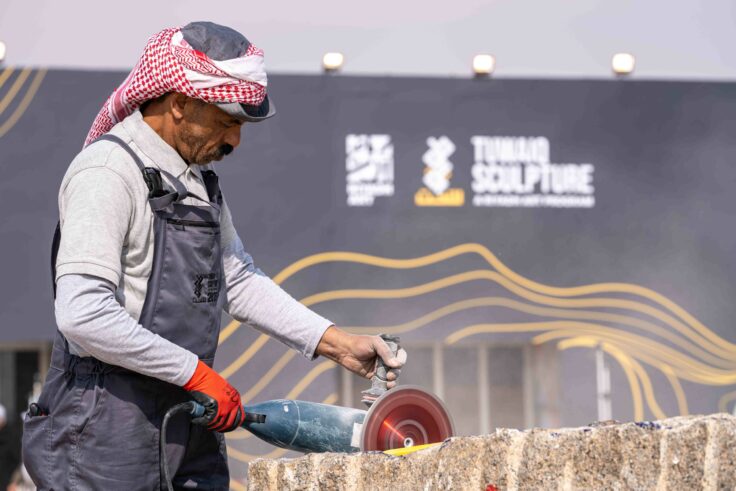 Tuwaiq Sculpture Is the Event Transforming Riyadh Into an Art Gallery

With seven-years left before Saudi Arabia’s very promising Vision 2030 is expected to come into fruition, the Kingdom has proved to be capable of walking the talk, slowly unveiling a wide range of pharaonic projects that are expected to uplift the Gulf State and diversify its revenue streams away from oil. Since the reveal of its upcoming ventures, one element consistently seems to be at the center of all planned initiatives and events, namely arts and culture.

Enter: Tuwaiq Sculpture, an annual symposium that brings local and international creatives together to create public artwork in a live setting. Held as part of the wider Riyadh Art Program, which is considered one of the largest public art projects in the world, the meeting of artistic minds is set to transform the city into a “gallery without walls” with more than 1,000 artworks fetaured across the Kingdom’s central hub.

“Tuwaiq Sculpture encourages artists to create works that contribute to Riyadh’s thriving creative scene. It is one of many cultural platforms for artists emerging from Riyadh today, as well as artists from around the world, so that they may use their talents to leave their legacy on the city’s ever-changing cityscape. In the coming years, works made at Tuwaiq Sculpture will fill Riyadh’s parks, streets, cultural districts, and public spaces, to be experienced by all in years to come,” said Khalid Al-Hazani, Executive Director for Riyadh Art.

Now in its fourth edition, the happening, which got underway on Jan. 10 and will run until Feb. 8, invited 30 guest artists from 20 different countries to produce large-scale sculptures that will become permanent fixtures of the capital city’s landscape. Carefully plucked out of a pool of 650 applicants, the chosen group was tasked to work around the theme of ”Energy of Harmony,” developed by curator Marek Wolynski, that asked them to “reflect on the fundamental characteristic of human existence.”

Having already started working on their next creation since the event kicked off, with the attendees invited to witness the creative process live in a dedicated space in Durrat Al Riyadh, the completed works will be showcased in an exhibition that will stretch from Feb. 5 to Feb. 10.

For the first time since its launch, Tuwaiq Sculpture will be using stone sourced from Saudi Arabia, specifically granite and Riyadh stone, also known as sandstone. On that matter, Sarah AlRuwayti, Tuwaiq Sculpture’s Project Manager explained that “the decision to use stones from our local quarries poses symbolic significance for Tuwaiq Sculpture, specifically to highlight Saudi Arabia’s rich history with the medium, from ancient artifacts to rock carvings and modern-day sculpture. In addition, we wanted local and international artists to connect with material drawn directly from the country’s environment. These granites and sandstone, once transformed into beautiful artworks, will fill Riyadh’s public spaces.”

Guests will also be able to take part in several in-person activities, including interactive workshops and panel discussions, exploring a wide range of topics from the principles of design and urban ecology to the art business.