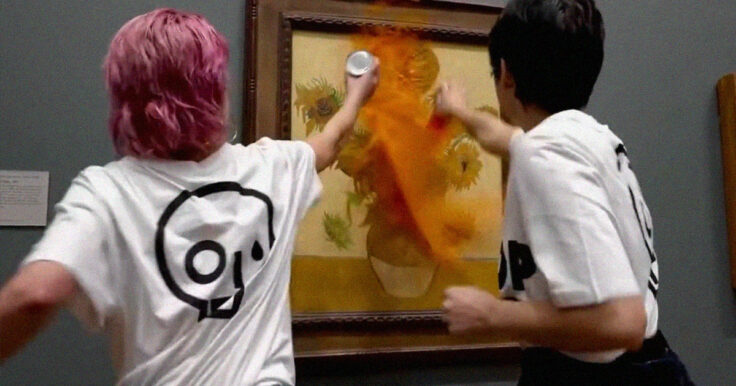 The below article is available as audio

This weekend, two fossil fuel protesters from the campaign group, Just Stop Oil, were charged for marching into London’s National Gallery on Oct. 14 and throwing a can of Heinz tomato soup at a Vincent Van Gogh painting before gluing themselves to the wall beneath the Sunflowers artwork, valued at $84.2 million. Since the centuries-old painting is glazed, it remained unharmed, however, the young women were both charged with criminal damage offenses.

It’s not the first time that a classic masterpiece gets desecrated by a food item in the name of climate change— back in May, a man, disguised as an elderly woman on a wheelchair, smeared cake on Leonardo da Vinci’s Mona Lisa, before urging bystanders to “think about the Earth” as he was led away by security guards.

While the range of public reactions to #SoupGate were mixed, for the most part, people on social media were irked by the fossil fuel protesters, whose actions were deemed as “performative.” And though the climate crisis is a serious and noble cause, the women gained little to no support from the general public. As it turns out, there is a reason for the public’s lack of sympathy towards the actions of the activists. According to a study published by Stanford and the University of Toronto, extreme protest tactics reduce popular support for social movements.

Published in 2017, the study reports that radical measures used by activists, such as blocking traffic or damaging property are effective for generating publicity, but are counter-productive when it comes to gaining support for the given cause. A catch-22 if there ever were one. The reason for this, according to the study, is because these tactics reduce feelings of identification with the movement, ultimately discouraging bystanders from supporting the cause or becoming activists themselves. Such behaviors typically reduce the credibility of the movement and, based on past research, people are more likely to distance themselves from those who disrupt social order.

The reactions to the Van Gogh painting protest are a great example as a lot of social media users took to Twitter to express their rage at the actions of the protesters.

“You can’t make people care about something by being repugnant and hateable. In fact, I would be surprised if actions like this do anything but harm the cause of taking environmentalism seriously,” said one user.

Meanwhile, others revealed that they did not understand why the activists decided to single out the work of the late Dutch artist. “They had me googling if Van Gogh was a colonizer or something, that man was just depressed,” wrote one Twitter user.

“I’m struggling to understand why destroying a painting of sunflowers done by Van Gogh, an impoverished man who was marginalized in his local community due to his mental illness, is the right target to make a statement about how awful the oil industry is,” stated another.

One user put it more simply: “The f*ck did Van Gogh do to hurt the climate?” he asked.

I’m struggling to understand why destroying a painting of sunflowers done by Van Gogh, an impoverished man who was marginalised in his local community due to his mental illness, is the right target to make a statement about how awful the oil industry is.

However, the study goes on to state that the best way to attract attention and widespread awareness to your cause is by way of media coverage, and since the media commonly covers events that are “novel, dramatic, and sensational,” activists often go out of their way to engage in radical protest methods, be it blocking highways, vandalizing property, or hurling a can of tomato soup at one of the world’s most famous paintings.

Since last week, when the events first occurred, there have been countless articles and think pieces prompting discourse around climate change. As one user on Twitter pointed out, a climate activist who self-immolated in front of the United States Supreme Court building in April didn’t get half the coverage as the defiling of Van Gogh’s painting.

Researchers call this the activist’s dilemma, in which the same protest actions that may peak the media’s interest and attract widespread awareness are also likely to result in less support for social movements.

#SoupGate came amid a slew of milk-pouring protests that are currently taking place in the UK, where animal cruelty activists are entering supermarkets and spilling the dairy product as a part of an awareness campaign. Similarly, people are criticizing the protesters for seemingly having no qualms about wasting food items during a major cost of living crisis in Britain.

Okay now folks in the UK who want a plant-based future are doing milk dumps at the grocery store. Curious to know what folks think about this. pic.twitter.com/tBDEFgyt5x

“Look at them pouring milk away in supermarkets, I think I’ll turn vegan” said no-one ever!” read one of the many Tweets condemning the actions. Even the vegan community stepped in to point out how their well-intended campaign is counterproductive. And sure, it may not have been the most efficacious way to gain popular support— but if the goal was to attract attention, the animal cruelty activists were successful.

The same could be said about the protesters from Just Stop Oil. Aside from the public backlash, social media flogging, and the criminal charges they’re facing, they got what they wanted at the end of the day, which is to start a conversation around climate change and get everyone talking. And according to our Twitter feeds, people aren’t even close to being done. 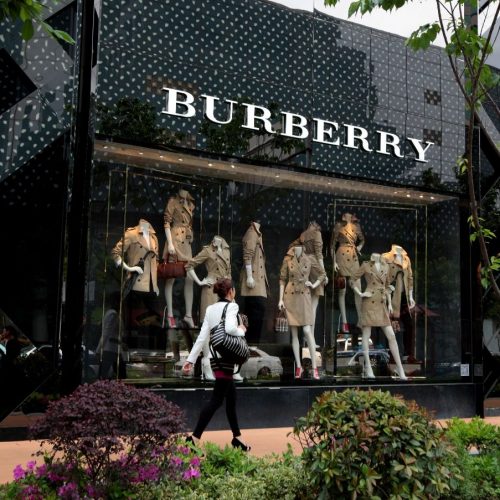