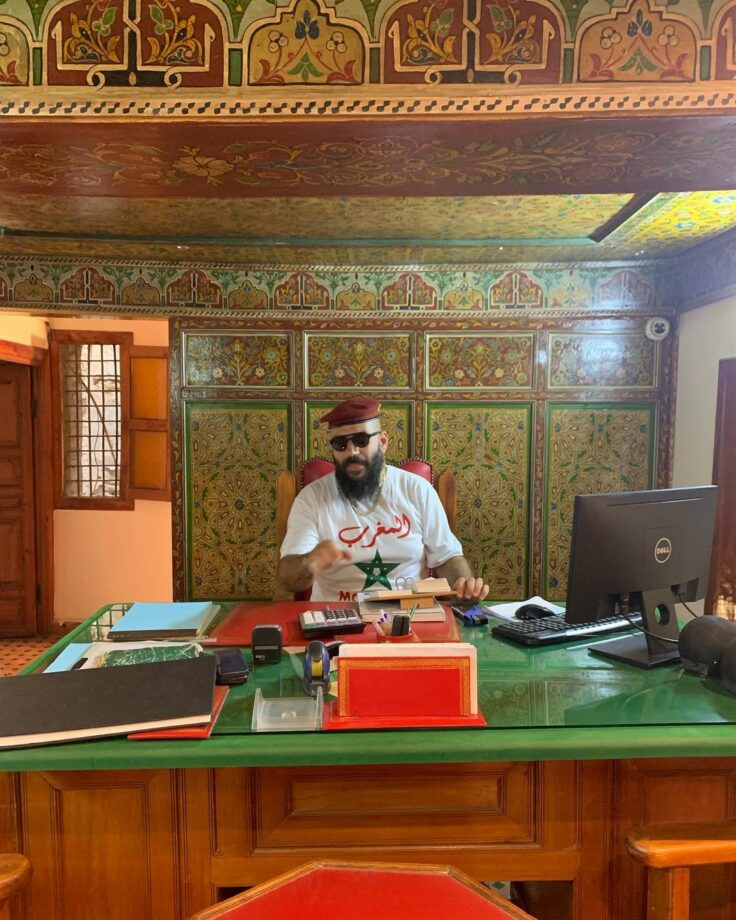 From Electro-Funk to Altruism, P-Thugg’s ‘Ya Habibi Market’ is A New Kind of Charity Shop

You might know P-Thugg as one half of the self-proclaimed “only successful Arab/Jew partnership since the dawn of human culture,” aka Chromeo, or the Grammy-nominated Canadian electro-funk music duo behind hits like ‘Jealous’ and ‘Needy Girl’. But P—né Patrick Gemayel—is now pushing his Arab heritage forward far beyond cheeky commentary on one of the world’s most controversial conflicts.

Ya Habibi Market is his latest venture, and though ambitious, it is perhaps one of the region’s most altruistic operations. Think of it as part-collective, part charity webstore. “Ya Habibi Market has no interest in profit making,” Gemayel makes clear.

The premise is simple: “The main goal is to unite all of us MENA creatives spread out around the world under one roof to create special capsules and items to raise funds for different charities and fundraisers in our communities back home,” he explains.

Since its launch in October, Gemayel has already partnered up with Lebanese illustrator Raphaelle Macaron, DJ and collector Disco Arab, streetwear label Kuvrd and Iraqi rapper Narcy. 100 percent of profits from each collaboration went on to benefit a charity in the region. So far, they’ve donated to various charities in Lebanon, Iraq, and Jordan.

The initiative saw its beginnings after the Lebanese Thawra that began in late 2019. Emotions ran high for Gemayel upon the devastating Beirut explosion of August 4. With the pandemic still holding its grips on the world through the months that followed, he found the time to do something he’s always wanted: put his resources to real use.

“With the accumulated frustration and the down-time I was forced into, not touring because of COVID-19, everything was brewing inside. With my band Chromeo, we had setup a charity merch capsule for COVID-19 relief in Black and POC communities and it worked really well so we decided to do the same for Beirut,” he says.

“Once I closed off the Beirut project and wired the funds to Impact Lebanon, I was left with one question resonating in my head: “و بعدين؟؟” as my Egyptian jiddo would always repeat to me after I had achieved something good, as to push me to not rest on my laurels and think of the next thing.”

In a matter of two weeks, Ya Habibi Market set up shop with barefaced potential to make change in the Arab world. Gemayel’s well-defined mission guarantees its impact. “In my view, giving back to communities in need back home is the best way to give our children and the next generation an opportunity to choose where they want to achieve their goals and live their lives to the fullest potential,” he explains.

“[I want to] offer them something better than the premature emigration to flee an unfortunate set of circumstances in their native lands.” Gemayel’s dispositions are anything but unfounded. Due to political unrest, corruption, and struggling economies, nearly half of young Arabs have considered emigrating to another country according to this year’s Arab Youth Survey.

“I know this hard path, and living it has always been a full-time job. Oscillating between trauma and recovery. Going back or fulfilling our dreams abroad. All choices and sacrifices nobody in the world should have to make,” he admits.

At eight-years-old Gemayel began his life as in immigrant in Montreal, going on to bond over the diaspora experience at a French-language school with the second half of Chromeo, David Macklovitch, whose mother emigrated from Morocco.

The duo’s shared experience is arguably foundational to their success. In a way, it’s also what laid the blueprint for Ya Habibi Market.

“When I collaborate with artists like Raphaelle Macaron, Ali Cha’aban, Disco Arab, Rawad Mansour or Narcy and we get an instant connection; all of a sudden it feels like you’re 12 years old again and you find that friend you wish you had when you emigrated in a new country, a completely different culture, and had to face what seemed at the time like an unsurmountable learning curve and adaptation period,” he says. “That to me is worth more than any amount of money.”

But the webstore and collective aims to not only serve as connecting grounds for Arabs across the globe, but to actually work towards eliminating the conditions driving Arabs to emigrate to begin with.

“I was having a checking-in-post-Beirut-explosion call with [Drake-collaborator and co-founder of OVO Sound label] Noah Shebib and we were talking about everybody in the business who’s not only Lebanese but from the region and the list was pretty long. But that’s not the issue. The issue is that most of the people in that list were from the diaspora and that’s really great for cultural pride, but we still end up with the same situation back home,” he explains.

Through Ya Habibi Market, Gemayel, whose decades-long career in the West admittedly came with problems of representation, hopes to shift the global conversation from the largely diasporic issue. To him, the root of the problem lies in the lack of opportunities in Middle East and North Africa.

“Even if creative industries are more welcoming today than let’s say, right after 9/11 when we all went from funky neighbors to suspected public dangers, there are no doors you can open to get to that point.”  Ya Habibi Market hopes to serve as an open door towards global success for the Arab world’s future generations.

With Narcy’s Iraq-a-fella Records, Gemayel created a highly reflective 3M panels football that quickly sold out. The profits from the ‘Ball of Light’, as they called it, went on to help Iraqi children in need of congenital heart disease surgery. With Rafaelle Macaron, the platform released their ‘Discover Lebanon’ tote bag which went on to aid in Lebanon’s relief efforts via non-profit Impact Lebanon. Their collaboration with streetwear label Kuvrd, which constituted of Keffieyh-patterned masks, provided meals to refugees living in Jerash’s Palestinian Camp.

“Without these basic opportunities, our countries have no bright future so I don’t even see how I could act otherwise,” he says.