Jewellery is particularly huge in the Middle East, not least in Saudi Arabia where Amaya Jones’s mother is from—a painter who ultimately served as a powerful influence for the young artist to embark onto a journey as a jewellery designer.

Equally influential was Jones’s father, who also lived a creative journey of his own as an actor. Together with her mother, he set a foundation for what now is Amaya Jones—both the designer, and her eponymous jewellery label that has taken off since its launch in September 2016.

Prior to the inception of her brand, Jones dabbled in the art world upon receiving her Bachelor of Fine Art from Tufts University. After a few stints working in galleries, she pursued a Masters in Art business from Sotheby’s Institute, a feat that just a few years later culminated into the beginning of her career as a jewellery designer.

The designer maintains a fascination with gemstones, and their energetic, healing properties in particular. Made of tourmaline and diamonds, each piece is handcrafted in Los Angeles, and the stones she uses remain untouched, with their imperfections on full display. To her, that’s what makes each piece unique.

For her debut collection, Jones took to her desert roots for inspiration. She aptly titled that collection ‘Sun’, and it featured her minimal geometric necklaces, rings, and earrings adorned by the colourful tourmaline stones known to absorb negative energy, much like the sun.

Nature was again her source of inspiration for her second collection. This time though, the designer set her sights on the moon and the sea. The pieces are simple, minimal and dainty—featuring baroque pearls, diamonds, and sapphires.

If you’re curious to see Jones’s designs for yourself, we picked out our favourite pieces for you 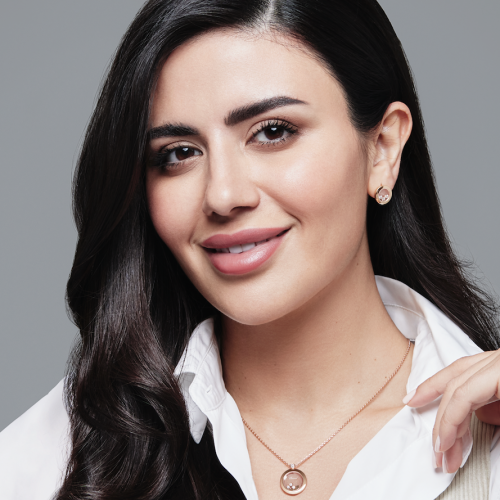