I Tried to Make the World Better in One Week

To be completely honest, I’ve never cared about the environment enough to consider making changes in my day-to-day life to make it better. It’s an awful thing to say, but it’s true.

I do, however, think of myself as a decent person, so my lack of interest in reducing my carbon footprint wasn’t necessarily deliberate, rather an insouciance that ultimately manifested itself into total disregard. In the end though, and as Edmund Burke said, “The only thing necessary for the triumph of evil is for good men to do nothing”.

My interest to stop doing nothing was sparked upon meeting Amina Abdellatif, a young Tunisian graphic designer, vegan, and an all-around better person than me.

She made a name for herself years ago when she started blogging during the Arab Spring—all whilst working for someone directly involved with the old Tunisian regime. She used to be in advertising, but quit because she had to write ads for things she didn’t consume.

Today, she’s everyone’s go-to designer—working with a number of major businesses in Tunisia and all over the Arab world. Her home is practically trash-free. She shops strictly at thrift stores. She never buys imported goods, and almost always makes her own food. So yeah, by my standards—she’s a pretty good person.

After speaking with Amina, it became clear that her biggest influence was her mother, who after growing up poor in Kelibia (a small coastal town in the Cap Bon) had unintentionally developed habits that would be labelled today as ‘environmentally conscious’.

Her now 75-year-old mom encouraged her to live a better lifestyle, and the decision came easy to Amina, and overtime she adopted a number of her mother’s habits. She then realized she had gained 20 kilos over the years, and to top things off, her lactose-intolerant husband was constantly taking medication for various things—so they both desperately sought a total lifestyle change, and after watching What the Health on Netflix, it was clear that veganism was the way to go.

She’s kept up her environmentally conscious lifestyle for over five years and has been vegan for one, so evidently, she was the right person to talk to about my mission to make the world better (a task that we knew was larger than both of us, but agreed it’s worth a try). 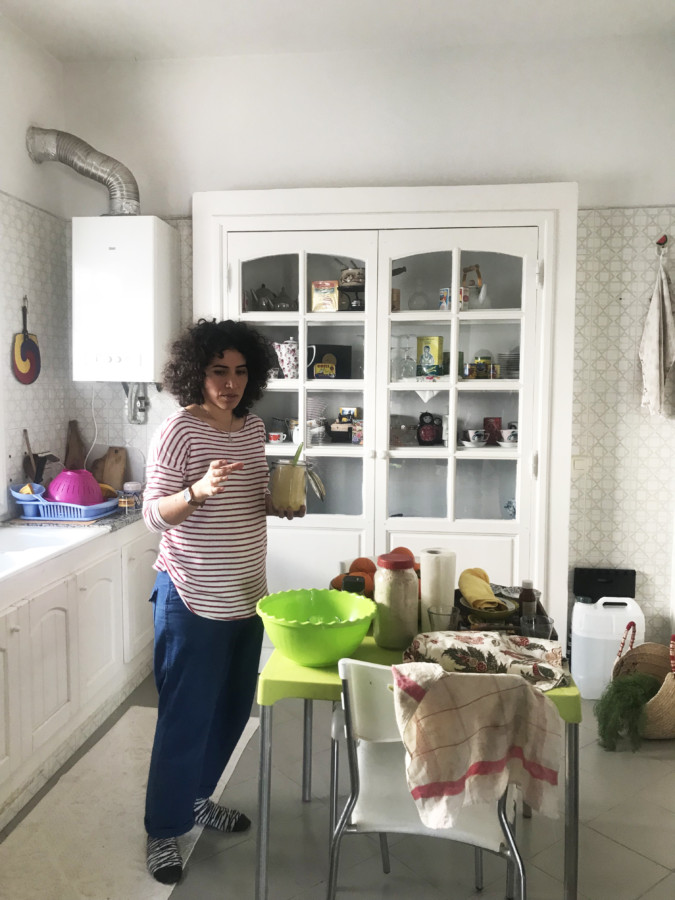 On the day we met, she taught me how to bake my own gluten-free, dairy-free bread—something I thought was impossible to make delicious but proved to be quite the treat. She shared with me her recipe for almond milk and provided the contact information for a local merchant that sells homemade tofu.

I was off to a pretty good start, but my list of tasks didn’t end at changing my diet. I had to also give up driving for the week to minimise pollution, produce zero waste, only consume locally sourced Tunisian products, and do a day of community service.

I was quite enthused to become vegan as I’m already lactose intolerant and not the biggest fan of meat anyway. The largest battle I faced was not producing trash, and figuring out how to get to work every day without my car.

In practice, almost everything was difficult to do—at least for the first few days. Perhaps it was because I was forcing myself to restrict my diet, but I conveniently found myself craving steak. I also forgot to bring my own tote bag when I shopped for groceries. I was also late to work since I didn’t account for the wait that came with taking the train. And not least, it turned out that trash is really difficult to avoid.

By the third day, I had a better grasp on things. I arranged my schedule so I had enough time to get to and from work. I constantly carried a small tote in my bag in case I had to do any kind of shopping. Finding local and organic food wasn’t all that difficult to do here in Tunisia. It was time-consuming, but often cheaper than buying imported goods. 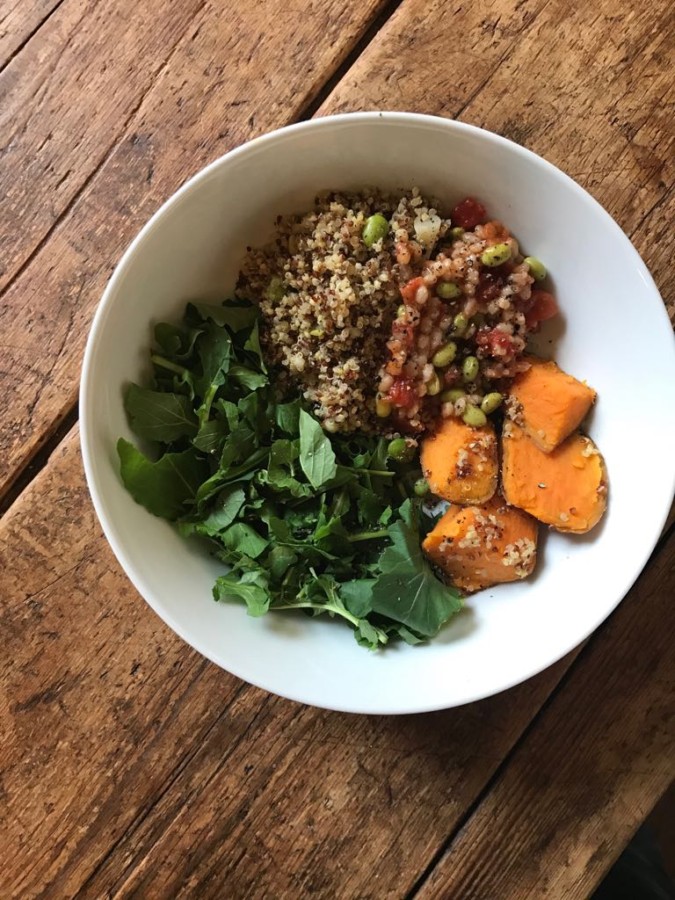 Difficulties arose every now and then, like when I wasn’t able to find non-toxic or non-chemical-ridden cleaning and beauty products. So naturally, I resorted to my friend Google, where I found recipes for both—most of which were surprisingly effective.

I ended up making a natural soap that I used as both shampoo and body wash. In lieu of moisturiser and hair conditioner, I used virgin olive oil my mother had given me. As far as cleaning my home, I found this very useful guide and learned that white vinegar is basically magic in a bottle.

Not producing waste proved almost impossible as everything ever sold incorporates some type of packaging. But, I tried to minimize as much as possible by taking my containers. Ultimately, I ended up limiting my shopping to street vendors and locally owned supermarkets rather than big stores since they seemed to be more keen on zero-waste shopping.

Then came the weekend, and it was time for my day of community service. Conveniently, a friend had organised a camping trip for the weekend in the mountainous region of Ain Drahem. So, I made it a mission to go and we wound up collecting trash there that had presumably been left by other campers or shepherds. 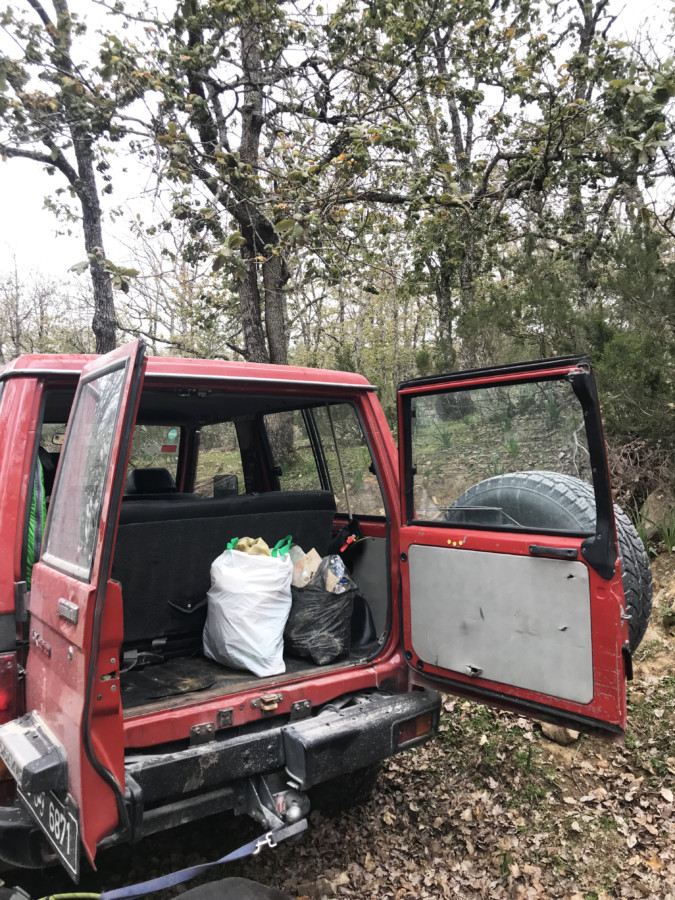 Before Sunday rolled around, I assumed I’d feel a sense of relief that my week of forcing myself to do “good things” was coming to an end. And if I’m being honest, a part of me was relieved that I could drive again because getting around the city proved to be too difficult for me to handle. But I’d be remiss to say that the week didn’t leave a mark.

I’m not a vegan, but I eat way less meat, dairy, and eggs because, in effect, I felt lighter and healthier with my new diet. I’m not totally trash-free, but I always carry my own tote bag and still take my own containers. However, I did stop using the natural soap as shampoo, but just until I found a substitute that’s natural and can tame my mane.

All in all, I suppose the experience did technically make the world better, even on a small scale. “Making the world better” is time-consuming though, but time is just a means to an end, and ultimately, it’s best to spend it actively making even the smallest of changes when the results will both make you healthier and significantly reduce your carbon footprint.