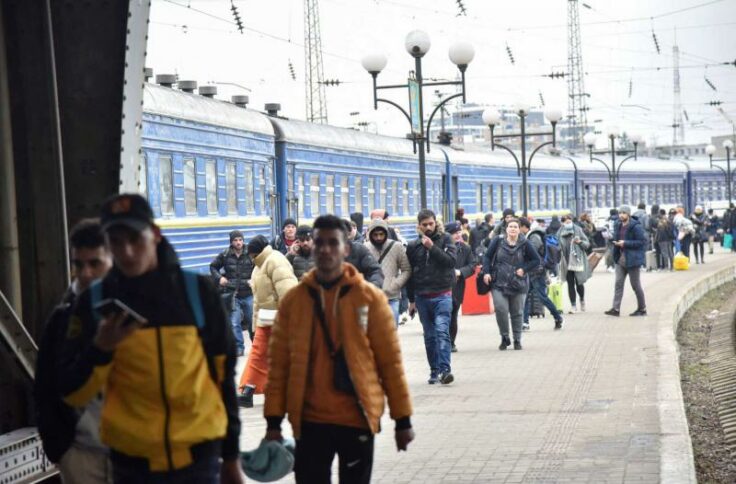 “They look like any European family you would live next door to."

Russia’s invasion of Ukraine sparked rolling news coverage this past week dissecting all its facets. Among them, the refugee outflow that’s underway due to the conflict. And although the intolerable fact of knowing any war is happening is enough to trigger desperation across the globe, the coverage of the media unnecessarily comparing the “quality” of refugees of European descent compared to others, added another somber layer to the current situation.

"This isn't a place, with all due respect, like Iraq or Afghanistan who has seen conflict rage for decades. This is a relatively civilized, relatively European – I have to choose those words carefully – city where you wouldn't expect that or hope that it was going to happen." pic.twitter.com/6N5v0rSd0P

As hundreds of thousands attempt to flee towards safety—mostly to the borders of the neighboring Poland, Hungary and Romania, western media outlets became saturated with discussions centered on the idea of Ukrainians as refugees. Commentary on their whiteness quickly ensued. Reporters unabashedly expressed their shock at the sight of white Ukrainians fleeing their war-torn nation, as if invasions have historically only struck countries belonging to populations who were black or brown.

“This isn’t a place, with all due respect, like Iraq or Afghanistan who has seen conflict rage for decades,” said one reporter in a news segment on the American CBS News. “This is a relatively civilized, relatively European – I have to choose those words carefully – city where you wouldn’t expect that or hope that it was going to happen,” he continued.

A British reporter, featured on Al Jazeera, carried on with a similar racist narrative, saying: “what’s compelling is just looking at them, the way they’re dressed. These are prosperous middle-class people. These are not obviously refugees trying to get away from areas in the Middle East [or] North Africa, they look like any European family you would live next door to.”

Although it hardly needs reiteration, refugees are “people who have fled war, violence, conflict or persecution and have crossed an international border to find safety in another country” as per UNHCR’s definition. By definition, anyone fleeing Ukraine due to its current state is a refugee. To put it bluntly, reporters’ addition of race as a criterion to refugee status is merely a signifier of their racism. Anyone who has faced racism very likely immediately understood it as such.

In the British newspaper The Daily Telegraph, one journalist wrote, explicitly admitting whiteness to be a source of shock: “They seem so like us. That is what makes it so shocking. War is no longer something visited upon impoverished and remote populations. It can happen to anyone.” While wars have most recently stuck impoverished and remote populations, which often happen to be inhabited by black and brown people, it has never been exclusive to these regions. World wars were launched by Western powers and implicated countless white, western refugees. To not include such reflections in reporting on Ukrainian refugees is a clear example of racism at play. 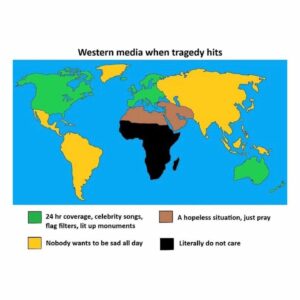 By comparison, when more than 200,000 refugees fled to safety from war-torn Syria in 2014, and countless North and Sub-Saharan African refugees died in overcrowded, unsafe boats along their journey across the Mediterranean Sea, western media outlets were not only unsympathetic, some argued against UNCHR’s calls for increase rescue operations. The sentiment was in large, unwelcoming to the 200,000 Syrian refugees headed to Europe in 2014, and the hundreds of thousands of others who followed in the following years.

In a report by the UN organization, it took the death, and images of a drowned the young boy, Aylan, washed up on a beach in Turkey in his red shirt for news outlets to ‘temporarily change the media debate on asylum’ when it comes to Syrian refugees. Even then, the image didn’t offer any fundamental change in neither European nations’ willingness to take on Syrian refugees nor the media’s hostile reporting of the refugees.

It wasn’t only reporters who used inflammatory language to describe Syrian refugees. In 2015, in 2015 UK Prime Minister David Cameron described them as ‘swarms of people coming across the Mediterranean.’ In sum, the difference in influx of Syrian refugees into Europe was largely reported as a ‘crisis’ and a ‘problem’, the difference being that the Ukrainian refugee influx is currently reported as one that warrants a solution, and not the other.

In between the lines of their reporting, western media is sending a message to brown and black folks that they’ve unfortunately already heard: only western people deserve saving. 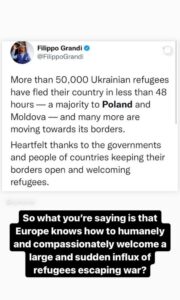 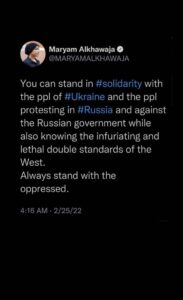 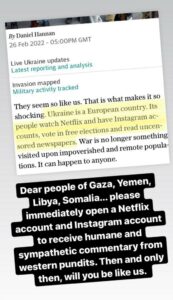