Sabrina Bellaouel lives in a cultural limbo. The French singer—originally from Algeria—is making waves across the French music scene, and with good reason.

There aren’t many singers like Sabrina emerging from the French RnB scene. Her culturally hybrid identity (despite her French-Algerian background, she chooses to sing the majority of her songs in English) and unparalleled talent, make her a rare artist with unprecedented room for growth and global domination. 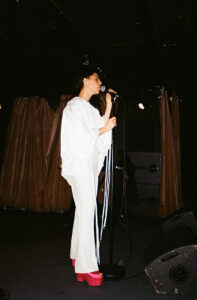 Her latest EP, Illusions, wasn’t rushed, “I needed to express things, it took me a year”, she says before elaborating on her lyric-writing process, which she says is laborious as she needs total isolation to fully concentrate (Sabrina headed back to Algeria to write the lyrics for Illusions). “I didn’t come up with a concrete idea for my EP strictly speaking, it just happened progressively,” she explains.

Sabrina draws the majority of her inspiration from William Basinski, Nils Frahm ou Jóhann Jóhannsson, “It’s during those soothing moments that I find inspiration,” she says, “I also find the current hip-hop scene in Paris really exciting. Bonnie Banane inspires me in life and musically, as well as Ichon’s electricity, and Plus Mafia. I like listening to Hamza before I turn up, but he’s from Brussels.” 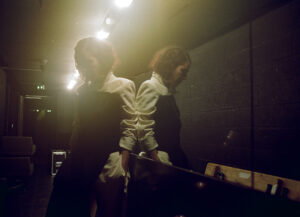 With two music videos; L’eau and Illusions (both of which directed by Hannah Rosselin and shot in Algeria), Sabrina’s work—from her lyricism to her visuals—is always effortlessly interweaved with memories from her homeland. In her second video, Illusions, Sabrina and Hannah staged a Henna ceremony for a future bride in a Hammam, during which her grandmother follows her in spirit. “I am fascinated by ancestral rituals. It ties people in an intimate human psyche.” She says, “I attach a lot of importance to my cultural origins, I’ve always been intrigued by Algerian aesthetics: the banknotes, the diversity of the architecture, and the Roman ruins of Timgad – the heritage of time. This is what I pay tribute to in my videos.”