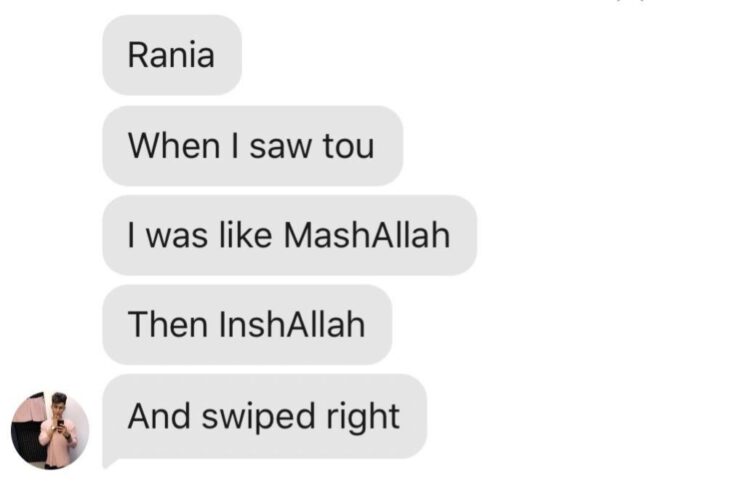 What Using Tinder is Like as a Young Arab

From Egypt to Morocco – it’s messy

Dating is difficult; even more so when you live in an Arab country. If you’re in Egypt, chances are, you have a hard time meeting other men or women. You’re likely to have the same problem in places like Libya, and a few countries in the GCC.

But gender inequality is just one part of the problem. Dating is still deemed a taboo by most Arab families whether you’re living in the region or abroad, so what better way to circumvent taboos than by leading a double life through your smartphone.

Enter Tinder, the application that transformed the dating scene across the region, not to mention, dramatically for those who are from marginalised communities.

Unfortunately, change isn’t always a good thing. To find out what it’s really like to use a dating app as an Arab, we reached out to a few people and asked them what their experience was like.

Mohammed, 28, Tunisia
It’s the worst. I don’t even want to go into detail, it’s just terrible. People don’t understand the app. They use it like it’s Facebook, not a dating app. Sometimes you’ll see a profile with a photo of them stood next to their boyfriend or girlfriend. Like, why are you on Tinder? I tried it for a while, then I deleted it.

Bilal, 27, Egypt
I started using Tinder because most of my friends are dudes, and all they do is smoke. So, I turned to the dark side. But Tinder is a joke here in Egypt, it’s not like how it is everywhere else. You just match with people and talk. There are a lot of people in Egypt from all walks of life on Tinder. There are a lot of fake profiles, many of them have no pictures. You have to sift through all of that to get to your targeted demographic. But my experience is different from other Egyptians. As a black man, it’s hard. Egyptian women don’t like black men.

Yasmin, 29, France
I started using Tinder because it was winter and I didn’t want to go out to meet new people. I mostly used it to talk with people that I usually don’t meet in real life, like rich white boys. I felt like I wouldn’t be judged. Arab guys are so judgmental. An Arab guy I met outside of Tinder once told me “we can’t be together because you smoked in front of my friend once”.

Ahmed, 22, UAE
I use dating apps because there aren’t “safe spaces” to meet people. I really don’t mind using them, but I like meeting people in real life. People can be racist on certain dating apps.

Malik, 23, France
Every time I open a dating app in a Western country, most of the guys that contact me are white males who usually fetishize my name and the way I dress. I remember one guy I was ready to meet randomly asked me if I would show up wearing Nike trainers or a Lacoste tracksuit as ‘expected’. It took me a while to realize that many of the stereotypes that affect us as minorities (North Africans in France) and many street-codes that are usually looked down on by society are majorly fetishized in the dating environment which I find very irritating. They usually automatically assume I come from a rough area and create a fantasized version of me in their minds that they try to build the whole conversation around.

Dana, 28, Denmark
In a country like Denmark where people are not very social, they like going out and drinking, the app is a good way to meet people. Once I conquered my fears of “what if somebody I know sees me on the app, what would they think of me” I really didn’t give any fucks. One of the biggest challenges is that people who are only interested in sex. As a virgin, it’s difficult to manage dates off the app. But if you manage to be selective and come to terms with the fact it’s a highly superficial app, it’s what you make of it.