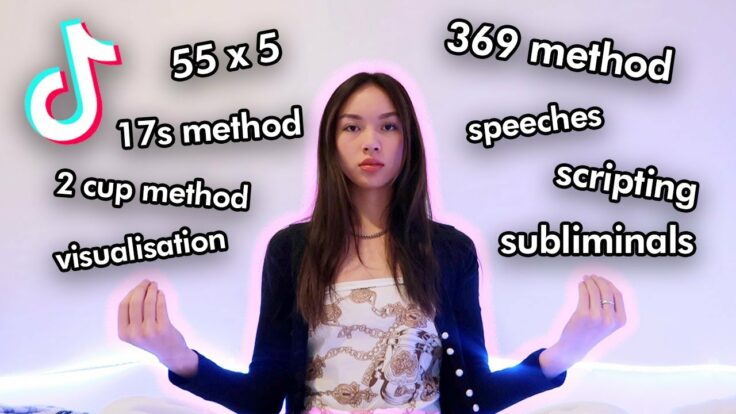 The Art of Manifesting is Taking Over the Globe

If you’ve been on TikTok, you probably have come across a myriad of teenagers performing manifestation rituals to get their crush to finally text them back, or large sums of money into their bank accounts.  The art of manifesting is this generation’s newest obsession, and we can’t help but wonder why.

Even if you’ve yet to explore it, the trend has officially gone viral. Google searches for the term have skyrocketed by 669 percent in the last year alone. Here’s what you need to know about it:

Manifesting is all about positive thinking and intentions. It is mainly based on the law of attraction popularized by Rhonda Byrne’s 2006 bestselling book ‘The Secret’, and the film of the same name. It is the belief that you attract what you think of.

“For example, when you’re going through a bad day; dwelling on negative thoughts brings even more negativity,” explained Khaoula Ghanem, a frequent manifestation practitioner I spoke to. In simple terms, if you think about it, you attract it.

From what I’ve learned, there’s a few ways to go about manifesting. If you want to give it a shot, scripting can be a good way to start.

“All you need to do is write down your manifestations, always starting with an affirmation. For example: never use ‘I want’ or ‘I need’ as those terms signal things you lack—instead use ‘I have’ or ‘I am’” says Ghanem.

For some Muslims, the notion of manifesting has even come with parallels to the concept of duaa.  “I think manifestation is another way of doing duaa” Latifa Jabouri, a 28-year-old Iraqi woman told me. “It reminds me of mothers, how they pray for our health, work, and other things,” she continued.

According to her, the rise of manifesting in Muslim communities may be linked to certain people’s personal desire to abandon institutional or religious connotations linked to prayers and divulging into a concept that is more diverse and attractive for younger generations. But despite the parallels to duaa, it’s less about going against religion and more about connectivity.

“I feel like it doesn’t really go against religion,” she explains. “It’s an internet term, you can’t attach it to religion. It’s not a conversation about that. It’s just about setting the intention to get what you want,” Jabouri continued.

“That way, people are able to relate to one another through it on a more global level,” she affirmed. And connectivity goes hand in hand with transparency, a defining Gen Z characteristic.

As you might have noticed, they’re a generation that puts transparency above all else. It’s what they demand from corporations, it’s seen through their unfiltered feeds full of make-up free selfies and unposed photographs, and their active participation in social movements that push for diversity and inclusion.

Gen Z relies on transparency and vocalizing their inner thoughts to create a collective togetherness. And after all, what is manifesting but a transparent form of expressing desire.