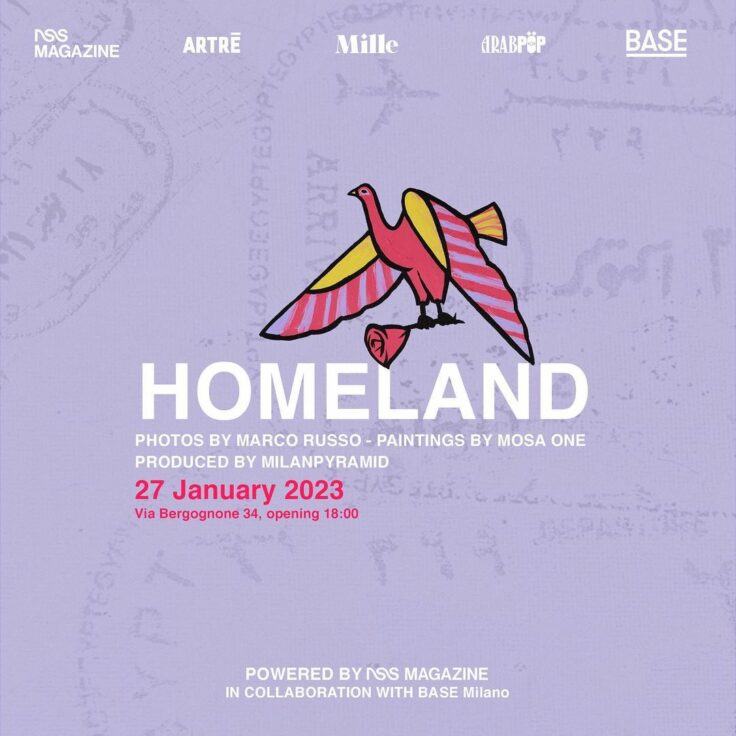 Milan’s cultural calendar has been booked this month, following a very busy return of Men’s Fashion Week, which brought the world’s most respected and esteemed individuals to watch shows, talk clothes, and convene in one of the industry’s nests. Next, the Lombardy city will leave room for other forms of art to prevail, exciting locals and tourists with a mile-long list of events, all while involving some of our region’s favorite creatives.

From Jan. 27 to Jan. 29, Milan is set to host an exciting art exhibition that delves into the complex and multi-faceted idea of belonging. Titled “Homeland,” the installation will primarily feature the work of Mosa One, an Italian-born Egyptian artist, who will take visitors on a heartfelt exploration of the many meanings of “home” through three different phases: the self, its relationship with external social contexts, and spiritual awareness.

“This is just the tip of a much larger iceberg,” says Mosa about his upcoming exhibition before expounding how the quest to harness your own identity is “in reality, a never-ending process,” and that he could see himself come back in a few years with a new take on the same topic.

“I just hope that the people that will make their way will be able to learn more about themselves, new edges about who they are and what they want to be seen as, the same way I did,” he added.

Paired with some intimate photographs taken by Marco Russo, who documented Keshk’s journey back to his roots in Cairo for 30 days, his careened shots beautifully complement this visual essay by depicting the substance matter of the pageant from two sides. Visitors can expect to be confronted with his perspective, as the observer, and Keshk’s, as the observed, sparking a dynamic and multi-layered conversation that delves deeper into the given theme.

The event will be held under the artistic supervision of Aya Mohamed, better known as Milanpyramid online, who has a track record of raising awareness on topics relating to identity and representation through culture and fashion. This in fact happens to be the stepping stone in her career as a curator, stringing a statement-making event ahead of her debut as Art Director with Bold Management’s recently launched creative studio.

“I was very happy to manage the growth of this project from the ground up. We’ve been working on this for over a year now, and it’s been incredible to have been part of a team of friends, that each has their own respective creative abilities, to birth the event we will be presenting,” Aya said before confessing that she hopes to see other initiatives, probing similar questions, become more common in Italy. “Culture is a great way of bringing people together, despite their differences, and ’Homeland’ is another attempt at doing just that,” she added.

Powered by BASE Milano, the collaborative project features contributions and close assistance from NSS Magazine, a publication focusing on all things fashion, street style, and design; Arabopop, a magazine that explores contemporary art and literature from the Arab world; Art3 Collective, an organization founded by young Italians of different ethnic backgrounds; and ourselves.

Inherently different from most of what usually takes place in Milan, the much-needed exhibition will surely prove itself to be a breath of fresh air for locals that have, in recent months, seen narrow-minded narratives become more and more prevalent.