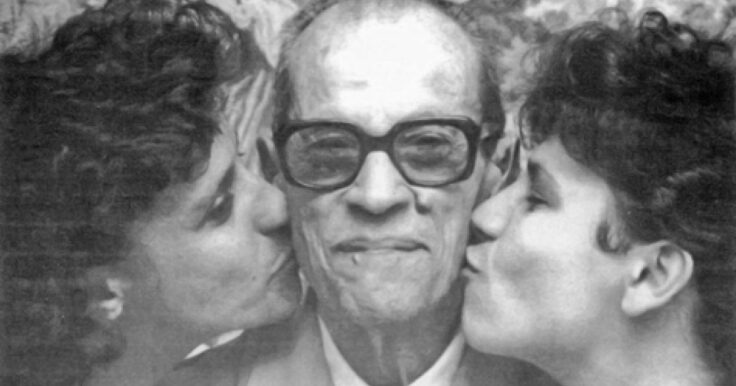 Umm Kulthum Mahfouz, the daughter of the great Egyptian writer Naguib Mahfouz, announced that she is publishing her first book Abi Naguib Mahfouz (My Father Naguib Mahfouz). The autobiographical novel will include excerpts from his never-read-before diary, which was found by sheer coincidence by his daughter when she was organizing her father’s private office.

Umm Kulthum described finding the only diary the legendary writer ever kept as “the arrangements of fate,” as she had already been working on her father’s biography for more than two years when she stumbled upon the notebook.

It seems like fate has been working on her side since 1988 when she attended the Nobel Peace Prize Award Ceremony in Sweden, alongside her sister Fatima, to accept the prestigious award on her father’s behalf due to his worsening health condition. Since then, she’s taken on the role of the guardian of a legacy more than a mere heir. She has unwaveringly protected her father’s books from copyright infringement, be it with the American University in Cairo Press, Mahfouz’s publisher, or other press outlets.

“In my book, I try to give a testimony to the history, to wipe away any injustice that has fallen on Naguib Mahfouz, the human being and his family. His creative work does not need a lawyer. In this book I try to lift the injustice off of his family, which was inflicted upon them by people close to them, as well as people, who claimed to be close to my father and thought of themselves as that they knew him better than his own family. Despite being out of the public eye, and our very rare public appearances, rumors have forced us to defend against charges we did not commit,” she said in a statement.

Umm Kulthum reveals her mission to debunk all the myths and refute all the rumors around the writer. During the course of 70 years, Mahfouz wrote 34 novels, 5 plays, and 15 short story collections. The author of The Cairo Triloogy staunchly refused authoring one single autobiography. The only window to his life was a biography collected by his dear friend and colleague Ragaa El-Nakkash from the author’s recordings and stories.

Now, readers from all over the world can discover the life of the only Arab writer to be awarded the Nobel Prize for Literature, through the lenses and cherished memories of his daughter. The latter promises to reveal his relationship with his family and highlights the usually marginalized role of his wife Attiyat Allah in his life and career.