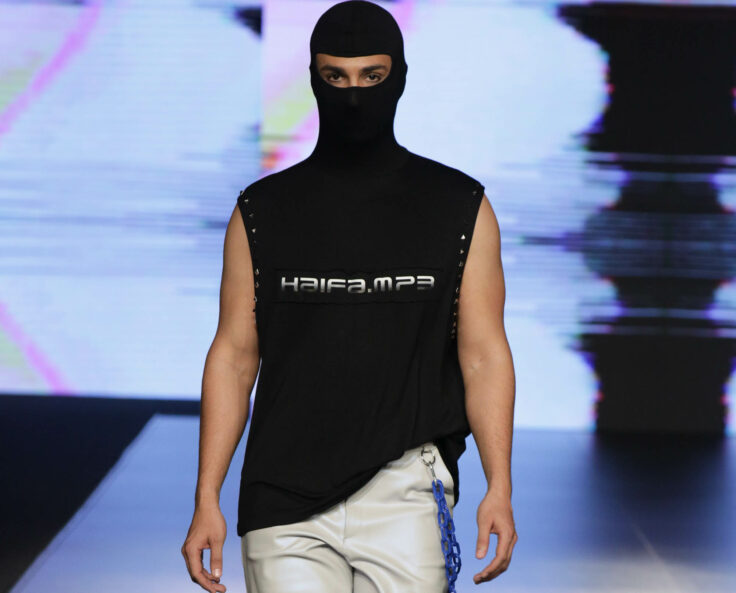 A Palestinian take on pop-punk

Ever since 20-year-old Palestinian designer Shukri Lawrence watched a Lady Marmelade parody on YouTube as a child, he became obsessed with the power of music videos. “I fell in love with the idea of music creating a whole visual world”, he explains. But growing up in a war-torn country—and in a hostile world that stigmatised his people and labelled them as terrorists—the internet soon became a refuge, where Lawrence and his generation found empowerment and acceptance through building online communities. His new collection, entitled XD (a nod to heyday of MSN and MySpace) is a nostalgic celebration of what it meant to be Arab and Emo.

Launched in 2017 with a mission to fight racism through fashion and social media, Trashy Clothing has been shaking up the regional fashion scene, thanks to Lawrence’s eccentric approach and liberal attitude towards gender norms. Having already made waves online since their early days with pro-Arab bootlegs, the brand has grown (the team includes Reem kawasmi, Omar Braika, Luai Al-Shuaibi and Sereen Khass) and appeared for the first time at Jordan Fashion Week last March. “I saw our show as a Trojan horse. As a brand trying to subvert traditional rules and censorships in the industry, we were able to bring our message of inclusivity into an event that is still considered exclusive to mainstream-minded fashion personalities”, he says discussing fashion’s potential to bring about change. “It felt great to see everyone’s reaction at the show. People seemed to be excited about the new voice we’re trying to bring to the Middle East”, he continues.

This is particularly meaningful as Lawrence recalls a childhood characterized by sadness; the collection is a creative manifestation of using those feelings to embody an aesthetic. Citing Tokio Hotel, Green Day, T.A.T.U and Marilyn Monson as some of his biggest musical influences, it’s clear Lawrence steeped himself in a bubble of early-aughts emo albums when he was younger in a bid to feel like he belonged. “After creating an archive of mid-2000’s statuses, posts, profile pictures and account names from Facebook, we realised that the most common state people used to express themselves was honesty”, he says before adding, “someone even named himself ‘Trapped in a Jail of Sadness’”.

In a society that teaches the youth to conform to constructed (and almost inescapable) norms, Lawrence and his friends were forced to build a coping mechanism for themselves through music and the internet, where they could embrace their moods freely, without feeling judged. But ten years later, with mental health still remaining a taboo conversation,fashion has firmly become Lawrence’s safe space for self-expression and inclusivity, where he’s finding the confidence to challenge standards of a racist, cis heteronormative world. As he notes, “I personally don’t share my issues with others in real life. I just put everything into my work”.