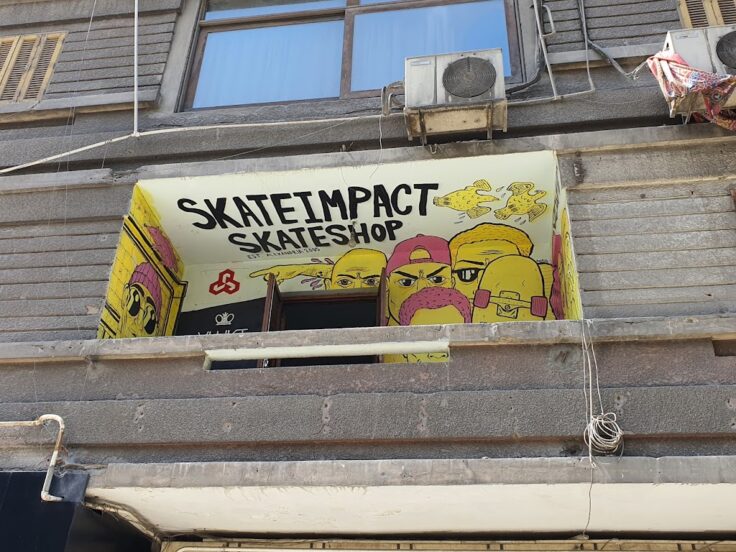 Skateboard culture is making its mark in the Arab world. Recently, we’ve witnessed the scene develop in Jordan, Saudi Arabia, Palestine and even in Morocco. But there’s something unique about the scene in Egypt, more specifically in the quiet seaside city of Alexandria.

Skateboarding saw its rise to prominence stateside in the late 1960’s and early 1970’s. Fast-forward 60 years and we find the global scene is thriving in Egypt. And curiously, its roots originate in Alexandria. We asked one of the godfathers of the scene Ziad Ashraf or better known by his handle @bouklao.

Bouklao is practically the human embodiment of the Egyptian skateboard scene. From his sartorial choices, to his attitude: an air of nonchalance, youthful bravado, and anti-establishmentarianism penetrates every aspect of his persona.

Skateboarding isn’t Ziad’s only passion. He’s an omni-medium creative. He also draws some awesome cartoons which you can see on his Instagram.

He sings and plays bass in Gnarjar who are, quite possibly, Egypt’s only punk rock band. With a lyrical focus on angst, partying, and you guessed it, skateboarding.

If that wasn’t enough, he’s also sponsored by, and works for Alexandria’s only (and Egypt’s first) skate shop, Skateimpact. Established in 2005, the shop itself acts as a hub for the seaside city’s thriving scene, passing through its doors both beginners and seasoned veterans alike. Skateimpact stocks everything an avid skateboarder could want, they offer clothing from the largest international skate brands, to skateboards themselves, again with a wide variety sizes, colors and brands. Even a quick glance at their social media will reveal the same punk swagger, and DIY ethos that Ziad embodies.

So naturally, we approached him to get the lowdown on the skateboard community in Alexandria and Egypt in general (Even the way he answered our questions oozed cool).

So, how did you get into skateboarding originally?

I started at the age of 12 or 13, sometime between 2005 and 2006, I learned about skating from the game Tony Hawk’s Pro Skater. I was skating for about 6 months using fake boards I’d buy from sports shops or wherever. Luckily my high school friend introduced me to Skateimpact, which opened around about that time, so I got my first original board from them.

How did the scene develop in Alexandria?

At that time the scene was growing out of Alexandria Sporting Club, and continued to do so for quite some time. That’s actually where I met brothers Omar Herrawi and Cherif Herrawi, founders of Skateimpact, and a few other kids including Amin Rida, Yassin Koptan and others. I quickly started skating with those guys every weekend. The scene started growing as a result of Skate Impact, they provided the boards, clothes and the hardware to the Alex scene. It was a labor of love, I know these guys had to wait months to get their shipments from abroad.

I guess that’s why the skateboard community is so strong in Alexandria?

Yes, in Alexandria it’s much bigger, mainly because Alex is smaller and easier to get around, we can also gather in larger numbers. Compared to Cairo, where it’s huge, and only people living in the same areas, close to each other can hangout.

I guess another reason is that the most popular skate spot in Alexandria is on a busy road, next to the sea. Anyone going anywhere would pass by the spot and see skaters. Even today, skaters still hang out there.

If you stop at any random person in Alex and ask them about skateboarding, they’ll know what it is.

It’s usually cities around the sea that have a bigger scene, even internationally: Marseille, LA and New York for example. Maybe it’s got something to do with the sea breeze?

Yeah, it’s not at all like that in Cairo. But what do you think about the scene there?

There are a lot of skaters in Cairo, but they only gather when there is a big session or something planned. They won’t go to daily sessions, unlike Alex.

Sure I get that, but have you ever thought about expanding?

We already work with partners and academies in Cairo, in fact all over Egypt. We even started working in USA, but with Corona we decided to hold the operations until the situation becomes better there.

What would you like for the scene in the future?

We would love to see more skaters land new tricks, at higher level than our generation, and of course free public parks all over Egypt. That would be a good start for sure!