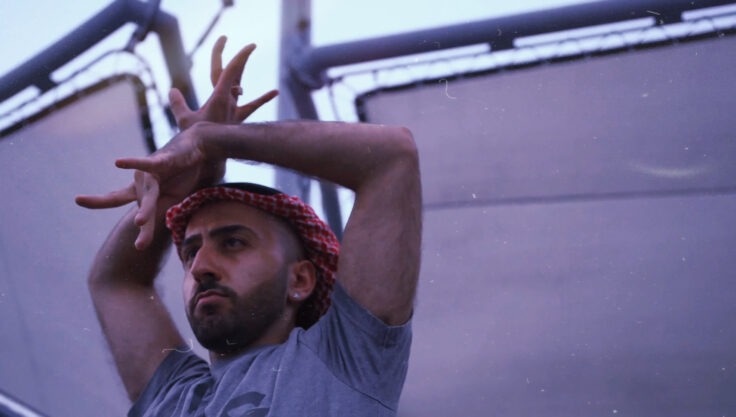 Against All Odds, Voguing and Ballroom Found a Home Here

Inside the Middle East’s ballroom subculture

Picture this: music blaring, a disco ball spinning, and glittered confetti floating through the air as the MC announces the next competition. “The category is… Live! Work! Pose!”. If you’ve seen Ryan Murphy’s Pose, you’d recognize the electrifying scene.

The show gave the world a peak into the world of ballroom, the subculture that names New York City as its birthplace; where young African and Latin American members of the city’s queer community found refuge.

You might also be familiar with the culture’s concept of ‘houses’, which function as de-facto families for the community led by ‘mothers’ and ‘fathers’. Perhaps you’ve heard of the House of Xtravaganza—one of the most recognized houses to emerge in the city, having been founded in 1982.

Now imagine this: you’re 26-years-old, queer and Jordanian living in a 9/11 America where a Muslim ban is in effect.

“I found my voice in the world of ballroom as a member of the House of Xtravaganza,” says Samer, better known through his pseudonym Ridikkuluz. Whilst ballroom’s beginnings consisted of a largely African American and Latino community, the community, by design, was for the disenfranchised. In 2020, the young Jordanian-American found refuge in it. And he’s not alone.

Ballroom culture has gone global. From Japan and Brazil to Lebanon, communities can be found all over the world. In the Middle East, Lebanon is the epicentre, as documented by photographer Mohammed Abdouni over the years, alongside the Arab world’s larger queer culture.

“There are plenty of Middle Easterners and North Africans in the ballroom community but it is spread out globally” explained Ridikkuluz. As a result, most connect via social media.

“I saw a video of Shireen vogueing in a battle whilst wearing a burqa which led to me meeting her in person. I met Xander Khoury from Sydney, Hoedy Saad from Lebanon, and Habibitch from Paris on social media,” he continued.

Despite the borders that came between them, and the pandemic as an obstacle, the community is constantly in touch. When the explosion shook Beirut in August, they knew they needed to do something. Xander Khoury took charge and thought up a plan.

A project where MENA ( Middle East/ North Africa) ballroom performers came together to raise awareness and funds to the Lebanese LGBTQI+ community who were affected by the blasts a few months ago. There are still places where living as yourself and loving who you love is life threatening and illegal. Despite it all, we keep on existing, shining and loving in all our glory! Featuring: @xanderkhoury (Lebanese, living in Australia) @ecleticother (Persian, living in New York/California) @ridikkuluz (Jordanian, living in NYC) @hoedysaad (Lebanese, living in Lebanon) @hishamtq (Palestinian/Malaysian, living in NYC) @_habibitch_ (Algerian, living in Paris) Thank you to @reyreyfernandez for all the hard work you put into this video and to @stevzar for the wonderful music If you have the means to support, I have attached links to to following organizations so you can donate: @queerrelieffund (Lebanon Relief for LGBTQ*) @btfacollective (Black Trans Femmes for the Arts) @Alqaws_org (Palestinian Queer Liberation) #ballroom #oldway #newway #voguefemme #arab #arabic #northafrican #vogueing #handperformance #armscontrol #lebanonrelief #palestinianrelief #btfa

Each from their home-bases, Ridikkuluz, Shireen, Hoedy, Xander, Habibitch, and Hisham Qumhiyeh, who is of Malaysian and Palestinian decent got together to release a film featuring performances by each to raise awareness and raise donations for Lebanon’s Queer Relief Fund, Black Trans Femmes for the Arts and Alqaws, an organization working towards Palestinian queer liberation.

“The project was to show that regardless of what we go through living in our truth, we still have ‘the resilience and the brilliance to get ourselves done’” says Ridikkuluz, quoting the legendary MC, Junior Labeija.