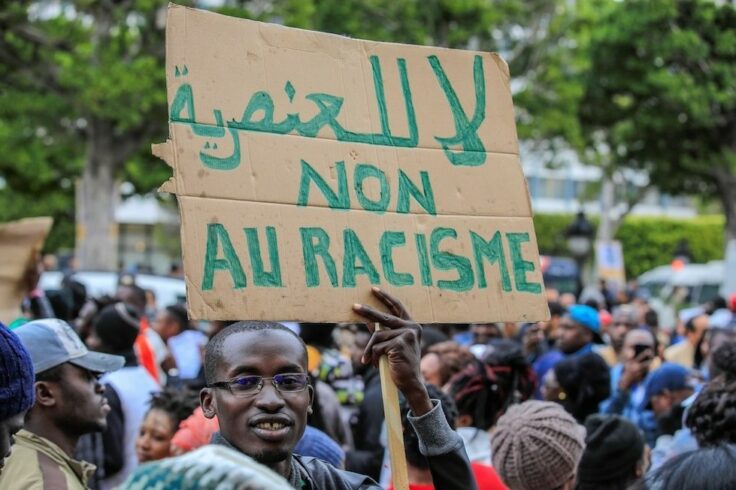 With protests erupting in the United States following the murder of George Floyd, activists all over the world have encouraged allies to take steps to be actively anti-racist. In the region, that has come in the form of confronting and deconstructing racism in our local communities, after all, racism is not just an American issue.

In Tunisia, there’s no question about racism’s omnipresence. Al Jazeera launched an investigative documentary in 2016, led by filmmaker Nada Issa, entitled ‘Tunisia’s Dirty Secret’, which exposed Tunisia’s relationship with racism – an issue that affects 15 per cent of the nation’s population who are black.

In 2018, Tunisia became the first Arab country to criminalize racism, having put in place a law that makes racial decriminalization punishable by jail time. The law allows prison sentences of up to three years. Despite this, as many Black Tunisians, activists and organizers would attest, racism continues to be prevalent in the nation.

In order to truly make change, anti-racism efforts need to be maximized. These are some anti-racist Tunisian organizations that are working to make societal change for you to support.

Voices of Tunisian Black Women
Founded by seven women a few months ago, Voices of Tunisian Black Women is the nation’s first organization entirely dedicated to Black women in Tunisia. The organization aims to amplify the voices of black Tunisian women who are often victims of racism and sexual harassment. “Our goal, of course, is to give Tunisian black women validation, to get rid of marginalization and the invisibility [of their problems], and to fight against the violence of society, but also to create a dynamic in the Tunisian feminist sphere that has no sensitivity to intersectionality,” explained Maha Abdelhamid, one of the organization’s founders to Mesh-kal.

Terre d’Asile
Founded in 2013, Terre d’Asile Tunisia is the Tunisian branch of the French organization by the same name. Organizers partnered up with Association of African Students and Interns in Tunisia to aid with difficulties many Black migrants (students and refugees) face upon moving to Tunisia.

Association Mnemty
Launched by anti-racist activist Saadia Mosbah, Mnemty is one of the few organizations that were created to combat racial discrimination in Tunisia. The group has mobilized to bring awareness to the struggles of Black Tunisians and Black people living in Tunisia.

Saadia Mosbah
Few have been as outspoken about Tunisia’s racism like Saadia Moosbah. After several failed attempts to launch an anti-racist organization under Ben Ali’s regime, the activist finally launched Mnemty after the 2011 revolution. The activist, along with the work of her organization, was the force behind the criminalization of racism in Tunisia in 2018. She is also behind the recognition of January 23 as a national holiday marking the abolition of slavery in Tunisia.

Affet Mosbah
Affet Mosbah (Saadia Mosbah’s sister) wrote a prolific piece in 2004 for Jeune Afrique entitled ‘Being Black in Tunisia’, which remains the most prolific text on Tunisian racism to this day. The activist continues her anti-racist efforts by contributing to Mnemty, and lending her voice to publications to discuss racism in Tunisia.